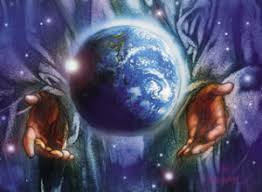 What the physical eye sees is not corrective, nor can it be corrected by any device which can be physically seen. As long as a man believes in what his physical sight tells him, all his corrective behavior will be misdirected. The reason why the real vision is obscured is because man cannot endure to see his own defiled altar. But since the altar has BEEN defiled, this fact becomes doubly dangerous unless it IS perceived. This perception is totally non-threatening because of the Atonement. The fear of healing arises in the end from an unwillingness to accept the unequivocal fact that healing is necessary. The fear arises because of the necessary willingness to look at what man has done to himself.

Healing was an ability which was lent to man after the Separation, before which it was completely unnecessary. Like all aspects of the space-time belief, healing ability is temporary. However, as long as time persists, healing remains among the stronger human protections. This is because healing always rests on charity, and charity is a way of perceiving the true perfection of another, even if he cannot perceive it himself. Most of the loftier concepts of which man is capable now are time-dependent. Charity is really a weaker reflection of a much more powerful love-encompassment, which is far beyond any form of charity that man can conceive of as yet. Charity is essential to Right-Mindedness, in the limited sense to which Right-Mindedness can now be attained. Charity is a way of looking at another AS IF he had already gone far beyond his actual accomplishment in time. Since his own thinking is faulty, he cannot see the Atonement himself, or he would have no need for charity at all. The charity which is accorded him is both an acknowledgment that he IS weak, and a recognition that he COULD BE stronger. The way in which both of these beliefs are stated clearly implies their dependence on time, making it quite apparent that charity lies within the framework of human limitations, though toward the higher levels.

We said before, twice in fact, that only Revelation transcends time. The miracle, as an expression of true human charity, can only shorten it at best. It must be understood, however, that whenever a man offers a miracle to another, he IS shortening the suffering of both. This introduces a correction into the Record, which corrects retroactively as well as progressively.

Fear as Lack of Love

Fear cannot be Christ-controlled, but it CAN be self-controlled. Fear is always associated with what does not matter. It prevents Me from controlling it. The correction is therefore a matter of YOUR will, because its presence shows that you have raised the UNIMPORTANT to a higher level than it warrants. You have thus brought it under your will, where it DOES NOT belong. This means YOU feel responsible for it. The level confusion here is perfectly obvious.

The reason that I cannot CONTROL fear for you is that you are attempting to raise to the mind level the proper content of the lower-order reality. I do NOT foster level confusion, but YOU can will to correct it.

You would not tolerate insane behavior on your part, and would hardly advance the excuse that you could not help it. Why should you tolerate insane thinking? There is a fallacy here you would do well to look at clearly.

Whenever you are afraid, it is a sure sign that you have allowed your mind to miscreate, i.e., have NOT allowed Me to guide it. It is pointless to believe that controlling the outcome of mis-thought can result in real healing. When you are fearful, you have willed wrongly. This is why you feel you are responsible for it.

You must change your MIND, not your behavior, and this IS a matter of will. You do not need guidance EXCEPT at the mind-level. Correction belongs ONLY at the level where creation is possible. The term does not really mean anything at the symptom-level, where it cannot work.
The correction of fear IS your responsibility. When you ask for release from fear, you are implying that it isn’t. You should ask, instead, for help in the conditions which have brought the fear about. This condition always entails a separated Mind-willingness. At this level, you CAN help it.

You are much too tolerant of Mind-wandering, thus tacitly condoning its miscreation. The particular result never matters, but this fundamental error DOES. The fundamental correction is always the same. Before you will to do anything, ask Me if your will is in accord with Mine. If you are sure that it IS, there will BE no fear.

You are His manifestation in this world. Your brother calls to you to be His Voice along with him. Alone he cannot be the Helper of God’s Son for he alone is functionless. But joined with you he is the shining Savior of the world, Whose part in its redemption you have made complete. He offers thanks to you as well as him for you arose with him when he began to save the world. And you will be with him when time is over, and no trace remains of dreams of spite in which you dance to death’s thin melody. For in its place the hymn to God is heard a little while. And then the Voice is gone, no longer to take form but to return to the eternal Formlessness of God.

Today we are continuing to develop the theme of cause and effect. You are not the victim of the world you see because you invented it. You can give it up as easily as you made it up. You will see it or not see it, as you wish. While you want it you will see it; when you no longer want it, it will not be there for you to see.

The idea for today, like the preceding ones, applies to your inner and outer worlds, which are actually the same. However, since you see them as different, the practice periods for today will again include two phases, one involving the world you see outside you, and the other the world you see in your mind. In today’s exercises, try to introduce the thought that both are in your own imagination.

Again we will begin the practice periods for the morning and evening by repeating the idea for today two or three times while looking around at the world you see as outside yourself. Then close your eyes and look around your inner world. Try to treat them both as equally as possible. Repeat the idea for today unhurriedly as often as you wish, as you watch the images your imagination presents to your awareness.

For the two longer practice periods, three to five minutes are recommended, with not less than three required. More than five can be utilized, if you find the exercises restful. To facilitate this, select a time when few distractions are anticipated, and when you yourself feel reasonably ready.

These exercises are also to be continued during the day, as often as possible. The shorter applications consist of repeating the idea slowly, as you survey either your inner or outer world. It does not matter which you choose.

The idea for today should also be applied immediately to any situation which may distress you. Apply the idea by telling yourself:

“I have invented this situation as I see it.”