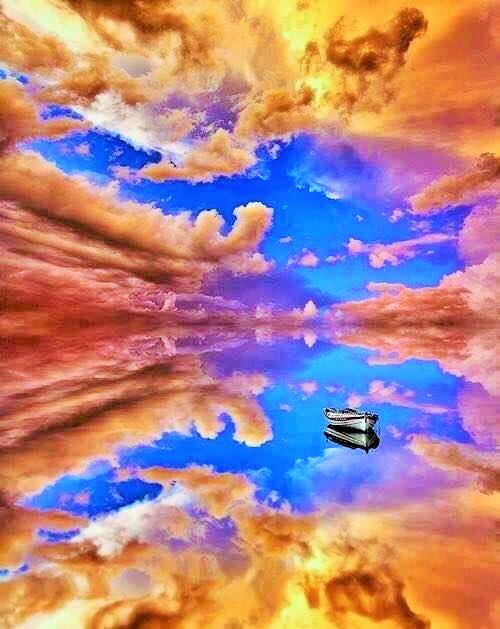 All of your difficulties ultimately stem from the fact that you do not recognize, or KNOW, yourselves, each other, or God. “Recognize” means “know again.” This means you knew before.
(Note that it does not mean SAW before.) You can see in many ways, because perception involves different interpretations, and this means it is not whole. The miracle is a way of PERCEIVING, not a way of KNOWING. It is the right answer to a question, but you do not ask questions at all when you know.

Questioning delusions is the first step in undoing them. The miracle, or the right answer, corrects them. Since perceptions CHANGE, their dependence on time is obvious. They are subject to transitory states, and this implies variability by definition. How you perceive at any given time determines what you DO, and action MUST occur in time. Knowledge is timeless because certainty is not questionable. You KNOW when you have ceased to ask questions.

The “questioning mind” perceives itself in time, and therefore looks for FUTURE answers. The unquestioning mind is closed merely because it believes the future and the present will be the same. This establishes an unchanged state, or stasis. This is usually an attempt to counteract an underlying fear that the future will be WORSE than the present, and this fear inhibits the tendency to question at all.

Visions are the natural perception of the Spiritual Eye, but they are still corrections. Bill’s question about the “Spiritual Eye” was a very legitimate one. The “Spiritual Eye” is symbolic, and therefore NOT a device for knowing. It IS, however, a means of right perception, which brings it into the proper domain of the miracle, but NOT of revelation. (PROPERLY speaking, a “vision of God” is a miracle rather than a revelation.) The fact that perception is involved at all removes the experience from the realm of knowledge. That is why these visions do not last.

The Bible instructs you to “KNOW thyself,” or BE CERTAIN. Certainty is always of God. When you love someone, you have PERCEIVED him as he is, and this makes it possible for you to KNOW him. But it is not until you RECOGNIZE him that you KNOW him. Only then are you ABLE to stop asking questions about him.

While you ask questions about God, you are clearly implying that you do NOT know Him. Certainty does not require action. When you say you are ACTING on the basis of sure knowledge, you are really confusing perception and cognition. Knowledge brings MENTAL strength for creative THINKING, but not for right doing.

Perception, miracles and doing are closely related. Knowledge is a result of revelation, and induces only thought (thinking). Perception involves the body even in its most spiritualized form. Knowledge comes from the altar within, and is timeless because it is certain. To perceive the truth is not the same as KNOWING it. This is why Bill is having so much trouble in what he calls “integrating” the notes.

His tentative perception is too uncertain for knowledge, because knowledge is SURE. Your perception is so variable that you swing from sudden but real knowledge to complete cognitive disorganization. This is why Bill is more prone to irritation, while you are more vulnerable to rage.

He is consistently BELOW his potential, while you achieve it at times and then swing very wide of the mark.

Actually, these differences do not matter. But I thought you might be glad to learn that you are much better off with DIFFERENT perceptual problems than you would be if you suffered from similar ones. This enables each of you to RECOGNIZE (and this is the right word here) that the misperceptions of the other are unnecessary. It is because you do not KNOW what to do about it that Bill reacts to yours with irritation, and you respond to his with fury.

I repeat again that if you ATTACK error, you will hurt yourself. You do not RECOGNIZE each other when you attack. Attack is ALWAYS made on a stranger. You are MAKING him a stranger by misperceiving him, so that you CANNOT know him. It is BECAUSE you have made him into a stranger that you are afraid of him. PERCEIVE him correctly, so that your Soul can KNOW him.

Right perception is necessary before God can communicate DIRECTLY to his own altars, which he has established in His Sons. There he can communicate with certainty His certainty, and His knowledge will bring the peace WITHOUT question.

God is not a stranger to His Own Sons, and His Sons are not strangers to each other. Knowledge preceded both perception and time, and will also ultimately replace (or correct for) them. This is the real meaning of the Biblical description account of God as “Alpha and Omega, the Beginning and the End.” It also explains the quotation “Before Abraham WAS, I AM.” Perception can and must be stabilized, but knowledge IS stable. “Fear God and keep His Commandments” is a real scribal error.

It should read, “KNOW God and accept His certainty.” (This error is why the commandments are all negative, in contrast to Christ’s statement about “Thou shalt love.” etc.) There are no strangers in His Creation. To create as He Created, you can create only what you KNOW and accept as yours.

Urtext – Manual for Teachers (Who are their Pupils? continued)

Time really, then, goes backward to an instant so ancient that it is beyond all memory and past even the possibility of remembering. Yet because it is an instant that is relived again and again and still again, it seems to be now. And thus it is that pupil and teacher seem to come together in the present, finding each other as if they had not met before. The pupil comes at the right time to the right place.

This is inevitable, because he made the right choice in that ancient instant which he now relives. So has the teacher, too, made an inevitable choice out of an ancient  past. God's Will in everything but seems to take time in the working-out. What could delay the power of eternity?
(End of Who are their Pupils?)

Although God does not forgive, His Love is nevertheless the basis of forgiveness. Fear condemns and love forgives. Forgiveness thus undoes what fear has produced, returning the mind to the awareness of God. For this reason, forgiveness can truly be called salvation. It is the means by which illusions disappear.

Today’s exercises require at least three full five-minute practice periods, and as many shorter applications as possible. Begin the practice periods by repeating today’s idea to yourself, as usual. Close your eyes as you do so, and spend a minute or two in searching your mind for those whom you have not forgiven. It does not matter “how much” you have not forgiven. You have forgiven them entirely or not at all.

If you are doing the exercises well, you should have no difficulty in finding a number of people you have not forgiven. It is a safe rule that anyone you do not like is a suitable subject. Mention each one by name, and say:

The purpose of the first phase of today’s practice is to put you in the best position to forgive yourself. After you have applied the idea for today to all those who have come to mind, tell yourself:

“God is the Love in which I forgive myself.”

Then devote the remainder of the practice period to offering related ideas such as:

“God is the Love with which I love myself.”

“God is the Love in which I am blessed.”

The form of the applications may vary considerably, but the central idea should not be lost sight of. You might say, for example:

“I cannot be guilty because I am a Son of God.”

“I have already been forgiven.”

“No fear is possible in a mind beloved of God.”

“There is no need to attack because love has forgiven me.”

The practice period should end, however, with a repetition of today’s idea as originally stated. The shorter applications may consist either of a repetition of the idea for today in the original or in a related form, or in more specific applications if needed. They will be needed at any time during the day when you become aware of any kind of negative reaction to anyone, present or not. In this event, tell him silently:

“God is the Love in which I forgive you.”