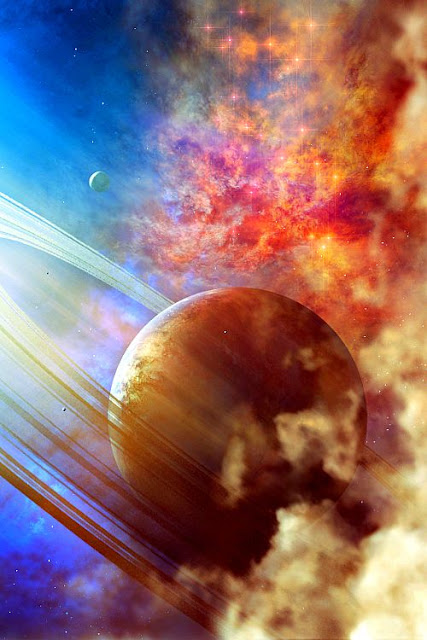 CHAPTER 7
The Consistency of the Kingdom

1 The creative power of both God and His creations is limitless, but they are not in reciprocal relationship. You do communicate fully with God, as He does with you. This is an ongoing process in which you share, and because you share it, you are inspired to create like God. Yet in creation you are not in reciprocal relation to God since He created you, but you did not create Him. We have already said that only in this respect your creative power differs from His. Even in this world there is a parallel. Parents give birth to children, but children do not give birth to parents. They do, however, give birth to their children and thus give birth as their parents do.

2 If you created God and He created you, the Kingdom could not increase through its own creative thought. Creation would therefore be limited, and you would not be co-creators with God. As God's creative Thought proceeds from Him to you, so must your creative thought proceed from you to your creations. Only in this way can all creative power extend outward. God's accomplishments are not yours. But yours are like His. He created the Sonship, and you increase it. You have the power to add to the Kingdom, but not to add to the Creator of the Kingdom. You claim this power when you become vigilant only for God and His Kingdom. By accepting this power as yours, you have learned to be what you are.

3 Your creations belong in you, as you belong in God. You are part of God, as your sons are part of His Sons. To create is to love. Love extends outward simply because it cannot be contained. Being limitless, it does not stop. It creates forever, but not in time. God's creations have always been because He has always been. Your creations have always been because you can create only as God creates. Eternity is yours because He created you eternal.

4 The ego demands reciprocal rights because it is competitive rather than loving. It is always willing to make a "deal," but it cannot understand that to be like another means that no deals are possible. To gain you must give, not bargain. To bargain is to limit giving, and this is not God's Will. To will with God is to create like Him. God does not limit His gifts in any way. You are His gifts, and so your gifts must be like His. Your gifts to the Kingdom must be like His gifts to you .

5 I gave only love to the Kingdom because I believed that was what I was . What you believe you are determines your gifts, and if God created you by extending Himself as you, you can only extend yourself as He did. Only joy increases forever, since joy and eternity are inseparable. God extends outward beyond limits and beyond time, and you who are co-creators with Him extend His Kingdom forever and beyond limit. Eternity is the indelible stamp of creation. The eternal are in peace and joy forever.

6 To think like God is to share His certainty of what you are and to create like Him is to share the perfect love He shares with you . To this the Holy Spirit leads you that your joy may be complete because the Kingdom of God is whole. We have said that the last step in the reawakening of knowledge is taken by God. This is true, but it is hard to explain in words because words are symbols, and nothing that is true needs to be explained. However, the Holy Spirit has the task of translating the use less into the use ful , the meaning less into the meaning ful, and the temporary into the timeless. He can therefore tell you something about this last step, although this one you must know yourself, since by it you know what you are. This is your being.

7 God does not take steps because His accomplishments are not gradual. He does not teach because His creations are changeless. He does nothing last because He created first and for always . It must be understood that the word "first" as applied to Him is not a time concept. He is first in the sense that He is the first in the Holy Trinity itself. He is the Prime Creator because He created His co-creators. BecauseHe did, time applies neither to Him nor to what He created. The "last step" that God will take was therefore true in the beginning, is true now, and will be true forever.

9 To heal is the only kind of thinking in this world that resembles the Thought of God, and because of the elements which they share, can transfer to it . When a brother perceives himself as sick, he is perceiving himself as not whole and therefore in need. If you too see him this way, you are seeing him as if he were absent from the Kingdom or separated from it, thus making the Kingdom itself obscure to both of you. Sickness and separation are not of God, but the Kingdom is. If you obscure the Kingdom, you are perceiving what is not of God .

Lesson 74
There is no will but God's.
﻿
1 The idea for today can be regarded as the central thought toward which all our exercises are directed. God's is the only will. When you have recognized this, you have recognized that your will is His. The belief that conflict is possible has gone. Peace has replaced the strange idea that you are torn by conflicting goals. As an expression of the Will of God, you have no goal but His.

2 There is great peace in today's idea. And the exercises for today are directed towards finding it. The idea itself is wholly true. Therefore it cannot give rise to illusions. Without illusions, conflict is impossible. Let us try to recognize this today and experience the peace this recognition brings.

3 Begin the longer practice periods by repeating these thoughts several times, slowly and with firm determination to understand what they mean and to hold them in mind:

4 There is no will but God's. I cannot be in conflict.

5 Then spend several minutes in adding some related thoughts, such as:

6 I am at peace. Nothing can disturb me. My will is God's. My will and God's are one. God wills peace for His Son.

7 During this introductory phase, be sure to deal quickly with any conflict thoughts that may cross your mind. Tell yourself immediately:

8 There is no will but God's. These conflict thoughts are meaningless.

9 If there is one conflict area which seems particularly difficult to resolve, single it out for special consideration. Think about it briefly but very specifically, identify the particular person or persons and the situation or situations involved, and tell yourself:

11 After you have cleared your mind in this way, close your eyes and try to experience the peace to which your reality entitles you. Sink into it, and feel it closing around you. There may be some temptation to mistake these attempts for withdrawal, but the difference is easily detected. If you are succeeding, you will feel a deep sense of joy and an increased alertness rather than a feeling of drowsiness and enervation. Joy characterizes peace. By this experience will you recognize that you have reached it.

12 If you feel yourself slipping off into withdrawal, quickly repeat the idea for today and try again. Do this as often as necessary. There is definite gain in refusing to allow retreat into withdrawal, even if you do not experience the peace you seek.

13 In the shorter periods, which should be undertaken at regular and predetermined intervals today, say to yourself:

14 There is no will but God's. I seek His peace today.

15 Then try to find what you are seeking. A minute or two every half-hour, with eyes closed if possible, would be well spent on this today.