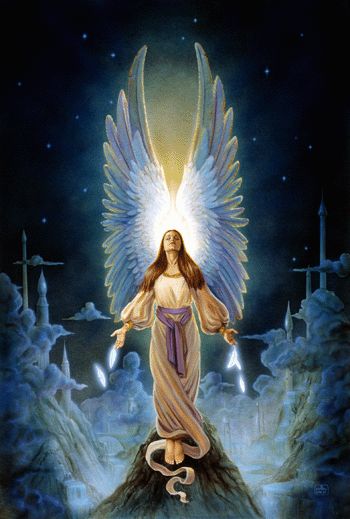 Day 238
Truth and illusion HAVE no connection. This will remain FOREVER true, however much YOU seek to connect them. But ILLUSIONS are ALWAYS connected, AS IS TRUTH. Each is united, a COMPLETE thought-system, but totally DISconnected to EACH OTHER. Where there is NO overlap, there separation MUST be complete. And to perceive THIS is to recognize where separation IS, and WHERE IT MUST BE HEALED. The RESULT of an idea is NEVER separate from its source. The IDEA of separation PRODUCED the body, and remains connected TO it, MAKING it sick because of its identification WITH it.

You THINK you are PROTECTING the body by HIDING this connection. For this concealment SEEMS to keep your identification safe from the “attack” of truth. If you but understood how much this strange concealment has hurt your mind, and how confused your own identification has become to you, BECAUSE of it! You do NOT see how great the devastation wrought by your faithlessness. For faithlessness IS an attack, which SEEMS to be justified BY ITS RESULTS. For, by WITHHOLDING faith, you SEE what IS unworthy of it, and CANNOT look beyond the barrier to what is joined with YOU.

To have faith is to heal. It is the sign that you HAVE accepted the Atonement for yourself, and would therefore share it. By faith, you OFFER the gift of freedom from the past, which you have RECEIVED. You do NOT use ANYTHING your brother has done before to condemn him NOW. You freely choose to OVERLOOK his errors, looking PAST all barriers between yourself and his, and seeing them AS ONE. And in that One you see your faith is FULLY justified. There IS no justification for faithlessness. But faith is ALWAYS justified.

Faith is the OPPOSITE of fear, as much a part of love, as fear is of attack. Faith is the acknowledgment of UNION. It is the gracious recognition acknowledgment of everyone as a Son of your most loving Father, loved by Him like you, and therefore loved by you as yourself. It is HIS Love that joins you, and FOR His Love, you would keep no-one separate from YOURS. Each one APPEARS just as he is perceived in the holy instant, united in YOUR purpose to be RELEASED from guilt. And in YOUR faith he IS released. You saw the Christ in him, and he was healed, because you looked on what makes faith FOREVER justified in EVERYONE.

Faith is the gift of God, through Him Whom God has GIVEN you. Faithlessness looks upon the Son of God, and judges him UNWORTHY of forgiveness. But, through the eyes of faith, the Son of God is seen ALREADY forgiven, free of all the guilt he laid upon himself. Faith sees him only NOW, because it looks not to the past to judge him, but would see in him ONLY what it would see in YOU. It sees NOT through the body’s eyes, nor looks to bodies for its justification. It is the messenger of the NEW perception, sent forth to gather witnesses unto its coming, and to return their messages to YOU.

Faith is as easily exchanged for knowledge as is the real world. For faith ARISES from the Holy Spirit’s perception, and is the sign you share it WITH Him. Faith is a gift you offer to the Son of God THROUGH Him, and WHOLLY acceptable to his Father as to him. And therefore offered YOU. Your holy relationship, with its NEW purpose, offers you faith to give unto EACH OTHER. Your faithlessness had driven you APART, and so you did not RECOGNIZE salvation in each other. But faith UNITES you in the holiness you see, NOT through the body’s eyes, but in the sight of Him Who joined you, and in Whom YOU are united.

Grace is not given to a BODY, but to a MIND. And the mind that RECEIVES it, looks INSTANTLY beyond the body, and sees the holy place where IT was healed. THERE is the altar where the grace was given, in which IT stands. Do you, then, offer grace and BLESSING to each other, for you stand at the SAME altar, where grace was laid for BOTH of you. And be you healed by grace TOGETHER, that YOU may heal through faith.

In the holy instant, you stand before the altar God has raised unto Himself and BOTH of you. Lay faithlessness aside, and come to it TOGETHER. There will you see the miracle of your relationship, as it was MADE AGAIN through faith. And there it is that you will realize that there is NOTHING faith can NOT forgive. NO error INTERFERES with its calm sight, which brings the miracle of healing with equal ease to ALL of them. For what the messengers of love are sent to do THEY DO.

Returning the glad tidings that it was done, to you who stand before the altar from which they were sent forth, TOGETHER.

As faithlessness will keep your little kingdoms barren and separate, so will faith help the Holy Spirit prepare the ground for the most holy garden that He would make of it. For faith brings peace, and so it calls on truth to enter and make lovely, what has already BEEN prepared for loveliness. Truth FOLLOWS faith and peace, completing the process of making lovely that they begin. For faith is still a learning goal, no longer needed when the lesson has been learned. But Truth will stay forever.

Let, then, your dedication be to the eternal. And learn how NOT to interfere with it, and make it slave to time. For what you think you do to the eternal, you do to YOU. Whom God created as His Son is slave to no-one, being lord of all, along with his Creator. You CAN enslave a body, but an IDEA is free, INCAPABLE of being kept in prison, or limited in ANY way, EXCEPT BY THE MIND THAT THOUGHT IT. For it remains JOINED to its source, which is its jailor or its liberator, according to which it chooses as ITS purpose FOR ITSELF.

Urtext – Psychotherapy: Purpose, Process and Practice
(The Practice of Psychotherapy, cont., The Question of Payment cont.,)

Only an unhealed healer could try to heal for money, and he will not succeed to the extent to which he values it. Nor will he find his healing in the process. There will be those of whom the Holy Spirit asks some payment for His purpose. There will be those from whom He does not ask. It should not be the therapist who makes these decisions. There is a difference between payment and cost. To give money where God's plan allots it has no cost. To withhold it from where it rightfully belongs has enormous cost. The therapist who would do this loses the name of healer, for he could never understand what healing is. He cannot give it, and so he does not have it.

Urtext – Workbook for Students
238. “On my decision all salvation rests."

” “Father, Your trust in me has been so great I must be worthy. You created me, and know me as I am. And yet You placed Your Son’s salvation in my hands, and let it rest on my decision. I must be beloved of You indeed. And I must be steadfast in holiness as well, that You would give Your Son to me in certainty that He is safe Who still is part of You, and yet is mine because He is my Self.”

And so again today we pause to think how much our Father loves us. And how dear His Son, created by His Love, remains to Him Whose Love is made complete in him.