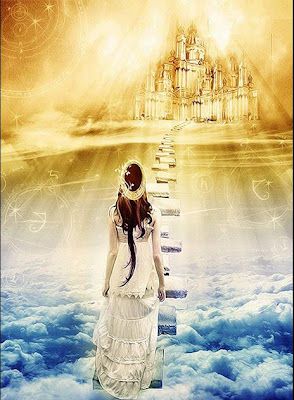 
X. For They Have Come

77 Think but how holy you must be from whom the Voice for God calls lovingly unto your brother, that you may awake in him the Voice that answers to your call! And think how holy he must be when in him sleeps your own salvation with his freedom joined! However much you wish he be condemned, God is in him.
And never will you know He is in you as well, while you attack His chosen home and battle with His host. Regard him gently. Look with loving eyes on him who carries Christ within him, that you may behold His glory and rejoice that Heaven is not separate from you.

78 Is it too much to ask a little trust for him who carries Christ to you, that you may be forgiven all your sins and left without a single one you cherish still? Forget not that a shadow held between your brother and yourself obscures the face of Christ and memory of God. And would you trade Them for an ancient hate? The ground whereon you stand is holy ground because of Them Who, standing there with you, have blessed it with Their innocence and peace.

79 The blood of hatred fades to let the grass grow green again and let the flowers be all white and sparkling in the summer sun. What was a place of death has now become a living temple in a world of light. Because of Them. It is Their Presence which has lifted holiness again to take its ancient place upon an ancient throne. Because of Them have miracles sprung up as grass and flowers on the barren ground which hate had scorched and rendered desolate. What hate has wrought have They undone. And now you stand on ground so holy Heaven leans to join with it and make it like itself. The shadow of an ancient hate has gone, and all the blight and withering have passed forever from the land where They have come.

80 What is a hundred or a thousand years to Them, or tens of thousands? When They come, time's purpose is fulfilled. What never was passes to nothingness when They have come. What hatred claimed is given up to love, and freedom lights up every living thing and lifts it into Heaven, where the lights grow ever brighter as each one comes home. The incomplete is made complete again, and Heaven's joy has been increased because what is its own has been restored to it. The bloodied earth is cleansed, and the insane have shed their garments of insanity to join Them on the ground whereon you stand.

81 Heaven is grateful for this gift of what has been withheld so long. For They have come to gather in Their Own. What has been locked is opened; what was held apart from light is given up, that light may shine on it, and leave no space nor distance lingering between the light of Heaven and the world.

82 The holiest of all the spots on earth is where an ancient hatred has become a present love. And They come quickly to the living temple, where a home for Them has been set up. There is no place in Heaven holier. And They have come to dwell within the temple offered them, to be Their resting-place as well as yours. What hatred has released to love becomes the brightest light in Heaven's radiance. And all the lights in Heaven brighter grow, in gratitude for what has been restored.

83 Around you angels hover lovingly, to keep away all darkened thoughts of sin and keep the light where it has entered in. Your footprints lighten up the world, for where you walk forgiveness gladly goes with you. No one on earth but offers thanks to one who has restored his home and sheltered him from bitter winter and the freezing cold. And shall the Lord of Heaven and His Son give less in gratitude for so much more?

84 Now is the temple of the Living God rebuilt as host again to Him by Whom it was created. Where He dwells, His Son dwells with Him, never separate. And They give thanks that They are welcome made at last. Where stood a cross stands now the risen Christ, and ancient scars are healed within His sight. An ancient miracle has come to bless and to replace an ancient enmity that came to kill. In gentle gratitude do God the Father and the Son return to what is Theirs and will forever be. Now is the Holy Spirit's purpose done. For They have come! For They have come at last!

85 What then remains to be undone for you to realize Their Presence? Only this—you have a differential view of when attack is justified and when you think it is unfair and not to be allowed. When you perceive it as unfair, you think that a response of anger now is just. And thus you see what is the same as different. Confusion is not limited. If it occurs at all, it will be total. And its presence, in whatever form, will hide Their Presence. They are known with clarity or not at all. Confused perception will block knowledge. It is not a question of the size of the confusion or how much it interferes. Its simple presence shuts the door to Theirs and keeps Them there unknown.

86 What does it mean if you perceive attack in certain forms to be unfair to you? It means that there must be some forms in which you think it fair. For otherwise, how could some be evaluated as unfair? Some then are given meaning and perceived as sensible. And only some are seen as meaningless. And this denies the fact that all are senseless—equally without a cause or consequence and cannot have effects of any kind. Their Presence is obscured by any veil which stands between Their shining innocence and your awareness it is your own and equallybelongs to every living thing along with you. God limits not. And what is limited can not be Heaven. So it must be hell.

87 Unfairness and attack are one mistake, so firmly joined that where one is perceived, the other must be seen. You cannot be unfairly treated. The belief you are is but another form of the idea you are deprived by someone not yourself. Projection of the cause of sacrifice is at the root of everything perceived to be unfair and not your just deserts. Yet it is you who ask this of yourself in deep injustice to the Son of God. You have no enemy except yourself, and you are enemy indeed to him because you do not know him as yourself. What could be more unjust than that he be deprived of what he is, denied the right to be himself, and asked to sacrifice his Father's love and yours as not his due?

88 Beware of the temptation to perceive yourself unfairly treated. In this view, you seek to find an innocence which is not Theirs but yours alone and at the cost of someone else's guilt. Can innocence be purchased by the giving of your guilt to someone else? And is this innocence which your attack on him attempts to get? Is it not retribution for your own attack upon the Son of God you seek? Is it not safer to believe that you are innocent of this and victimized despite your innocence? Whatever way the game of guilt is played, there must be loss. Someone must lose his innocence that someone else can take it from him, making it his own.

89 You think your brother is unfair to you because you think that one must be unfair to make the other innocent. And in this game do you perceive one purpose for your whole relationship. And this you seek to add unto the purpose given it. The Holy Spirit's purpose is to let the Presence of your holy Guests be known to you. And to this purpose, nothing can be added, for the world is purposeless except for this. To add or take away from this one goal is but to take away all purpose from the world and from yourself. And each unfairness that the world appears to lay upon you, you have laid on it by rendering it purposeless, without the function that the Holy Spirit sees. And simple justice has been thus denied to every living thing upon the earth.

90 What this injustice does to you who judge unfairly and who see as you have judged, you cannot calculate. The world grows dim and threatening, and not a trace of all the happy sparkle that salvation brought can you perceive to lighten up your way. And so you see yourself deprived of light, abandoned to the dark, unfairly left without a purpose in a futile world. The world is fair because the Holy Spirit has brought injustice to the light within, and there has all unfairness been resolved and been replaced with justice and with love. If you perceive injustice anywhere, you need but say:

91 By this do I deny the Presence of the Father and the Son.
And I would rather know of Them than see injustice,
which Their Presence shines away.


I will not be afraid of love today.

1 If I could realize but this today, salvation would be reached for all the world. This the decision not to be insane and to accept myself as God Himself, my Father and my Source, created me. This the determination not to be asleep in dreams of death while truth remains forever living in the joy of life. And this the choice to recognize the Self Whom God created as the Son He loves and Who remains my one Reality.


2 Father, Your Name is Love, and so is mine. Such is the truth. And can the truth be changed by merely giving it another name? The name of fear is simply a mistake. Let me not be afraid of truth today.