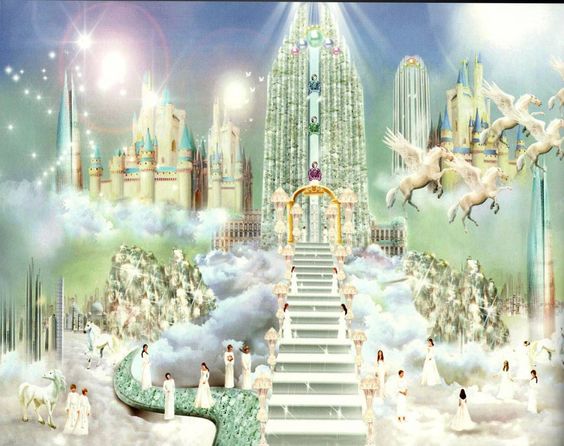 
VI. The Alternate to Dreams of Fear

47 What is a sense of sickness but a sense of limitation? Of a splitting off and separating from? A gap perceived between yourselves and what is seen as health? The good is seen outside; the evil, in. And thus is sickness separating off the self from good and keeping evil in. God is the alternate to dreams of fear. Who shares in them can never share in Him. But who withdraws his mind from sharing them is sharing Him. There is no other choice. Except you share it, nothing can exist. And you exist because God shared His Will with you, that His creation might create.

48 It is the sharing of the evil dreams of hate and malice, bitterness and death, of sin and suffering and pain and loss, that makes them real. Unshared, they are perceived as meaningless. The fear is gone from them because you did not give them your support. Where fear has gone, there love must come because there are but these alternatives. Where one appears, the other disappears. And which you share becomes the only one you have. You have the one which you accept, because it is the only one you wish to have. You share no evil dreams if you forgive the dreamer and perceive that he is not the dream he made. And so he cannot be a part of yours, from which you both are free. Forgiveness separates the dreamer from the evil dream and thus releases him.

49 Remember if you share an evil dream, you will believe you are the dream you share. And fearing it, you will not want to know your own Identity because you think that it is fearful. And you will deny your Self and walk upon an alien ground which your Creator did not make and where you seem to be a something you are not. You willmake war upon your Self, which seems to be your enemy, and will attack your brother as a part of what you hate. There is no compromise. You are your Self or an illusion. What can be between illusion and the truth? A middle ground where you can be a thing that is not you must be a dream and cannot be the truth.

50 You have conceived a little gap between illusions and the truth to be the place where all your safety lies and where your Self is safely hidden by what you have made. Here is a world established that is sick, and this the world the body's eyes perceive. Here are the sounds it hears—the voices which its ears were made to hear. Yet sights and sounds the body can perceive are meaningless. It cannot see nor hear. It does not know what seeing is, what listening is for. It is as little able to perceive as it can judge or understand or know. Its eyes are blind; its ears are deaf. It cannot think, and so it cannot have effects.

51 What is there God created to be sick? And what that He created not can be? Let not your eyes behold a dream, your ears bear witness to illusion. They were made to look upon a world that is not there, to hear the voices that can make no sound. Yet are there other sounds and other sights which can be seen and heard and understood. For eyes and ears are senses without sense, and what they see and hear they but report. It is not they that hear and see, but you, who put together every jagged piece, each senseless scrap and shred of evidence, and make a witness to the world you want. Let not the body's ears and eyes perceive these countless fragments seen within the gap which you imagined, and let them persuade their maker his imaginings are real.

52 Creation proves reality because it shares the function all creation shares. It is not made of little bits of glass, a piece of wood, a thread or two perhaps, all put together to attest its truth. Reality does not depend on this. There isno gap which separates the truth from dreams and from illusions. Truth has left no room for them in any place or time. For it fills every place and every time and makes them wholly indivisible.

53 You who believe there is a little gap between you, do not understand that it is here that you are kept as prisoners in a world perceived to be existing here. The world you see does not exist because the place where you perceive it is not real. The gap is carefully concealed in fog, and misty pictures rise to cover it with vague, uncertain forms and changing shapes, forever unsubstantial and unsure. Yet in the gap is nothing. And there are no awesome secrets and no darkened tombs where terror rises from the bones of death. Look at the little gap, and you behold the innocence and emptiness of sin that you will see within yourself when you have lost the fear ofrecognizing love.

54 Who punishes the body is insane. For here the little gap is seen, and yet it is not here. It has not judged itself nor made itself to be what it is not. It does not seek to make of pain a joy and look for lasting pleasure in the dust. It does not tell you what its purpose is and cannot understand what it is for. It does not victimize because it has no will, no preferences, and no doubts. It does not wonder what it is. And so it has no need to be competitive. It can be victimized but cannot feel itself as victim. It accepts no role but does what it is told, without attack.

55 It is indeed a senseless point of view to hold responsible for sight a thing that cannot see and blame it for the sounds you do not like, although it cannot hear. It suffers not the punishment you give because it has no feeling. It behaves in ways you want but never makes the choice. It is not born and does not die. It can but follow aimlessly the path on which it has been set. And if that path is changed, it walks as easily another way. It takes no sides and judges not the road it travels. It perceives no gap because it does not hate. It can be used for hate, but it cannot be hateful made thereby.

56 The thing you hate and fear and loathe and want, the body does not know. You send it forth to seek for separation and to be a separate thing. And then you hate it, not for what it is, but for the uses you have made of it. You shrink from what it sees and what it hears and hate its frailty and littleness. And you despise its acts but not your own. It sees and acts for you. It hears your voice. And it is frail and little by your wish. It seems to punish you and thus deserve your hatred for the limitations which it brings to you. Yet you have made of it a symbol for the limitations which you want your mind to have and see and keep.

57 The body represents the gap between the little bit of mind you call your own and all the rest of what is reallyyours. You hate it, yet you think it is your self and that without it would your self be lost. This is the secret vow which you have made with every brother who would walk apart. This is the secret oath you take again, whenever you perceive yourself attacked. No one can suffer if he does not see himself attacked and losing by attack. Unstated and unheard in consciousness is every pledge to sickness. Yet it is a promise to another to be hurt by him and to attack him in return.

58 Sickness is anger taken out upon the body, so that it will suffer pain. It is the obvious effect of what was made in secret, in agreement with another's secret wish to be apart from you, as you would be apart from him. Unless you both agree that is your wish, it can have no effects. Whoever says, "There is no gap between my mind and yours" has kept God's promise, not his tiny oath to be forever faithful unto death. And by his healing is his brother healed.

59 Let this be your agreement with each one—that you be one with him and not apart. And he will keep the promise that you make with him because it is the one which he has made to God, as God has made to him. God keeps His promises; His Son keeps his. In his creation did his Father say, "You are beloved of Me and I of you forever. Be you perfect as Myself, for you can never be apart from Me." His Son remembers not that he replied "I will," though in that promise he was born. Yet God reminds him of it every time he does not share a promise to be sick but lets his mind be healed and unified. His secret vows are powerless before the Will of God, Whose promises he shares. And what he substitutes is not his will, who has made promise of himself to God.


I love You, Father, and I love Your Son.

1 My gratitude permits my love to be accepted without fear. And thus am I restored to my Reality at last. All that intruded on my holy sight forgiveness takes away. And I draw near the end of senseless journeys, mad careers, and artificial values. I accept instead what God establishes as mine, sure that in that alone I will be saved, sure that I go through fear to meet my Love.

2 Father, I come to You today, because I would not follow any way but Yours. You are beside me. Certain is Your way. And I am grateful for Your holy gifts of certain sanctuary and escape from everything that would obscure my love for God, my Father, and His holy Son.