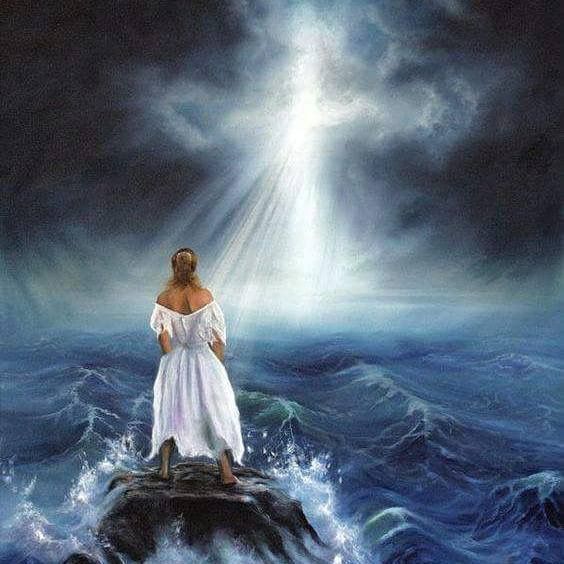 Condemn your Savior not because he thinks he is a body. Far beyond his dreams is his reality. But he must learn he is a Savior first, before he can remember what he is. And he must save who would BE saved. On saving YOU depends his happiness. For who is Savior, but the one who GIVES salvation? Thus he learns it must be his to give. UNLESS he gives, he will not know he HAS, for giving is the proof of having. Only those who think that God is lessened by their strength could fail to understand this must be so. For who COULD give unless he has, and who could lose by giving what must be INCREASED thereby?

Think you the Father LOST Himself when He created you? Was HE made weak because He shared His Love? Was He made incomplete by YOUR perfection? Or are you the proof that He IS perfect and complete? Deny Him not His witness in the dream His Son prefers to his reality. He must be Savior FROM the dream he made, that he be free of it. He must see someone ELSE as NOT a body, one with him, without the wall the world has built to keep apart all living things who know not that they live. Within the dream of bodies and of death, is yet one theme of truth. No more, perhaps, than just a tiny spark, a space of light created in the dark, where God shines still.

You cannot wake yourself. But you can LET yourself be wakened. You can overlook your brother’s dreams. So perfectly can you forgive him his illusions, he becomes your Savior from YOUR dreams. And as you see him shining in the space of light where God abides within the darkness, you will see that God Himself is where his body is. Before this light the body disappears, as heavy shadows MUST give way to light. The darkness cannot CHOOSE that it remain. The coming of the light MEANS it is gone. In glory will you see your brother then, and understand what REALLY fills the gap so long perceived as keeping you apart.

There, in its place, God’s Witness has set forth the gentle way of kindness to God’s Son. Whom you forgive is GIVEN power to forgive you your illusions. By your gift of freedom is it given unto YOU. Make way for love which you did not create, but which you CAN extend. On earth this means forgive your brother, that the darkness may be lifted from YOUR mind. When light has come to him through your forgiveness, he will not forget his Savior, leaving him unsaved. For it was in YOUR face he saw the light that he would keep beside him, as he walks through darkness to the everlasting Light.

How holy are you, that the Son of God can be your Savior in the midst of dreams of desolation and disaster. See how eagerly he comes, and steps aside from heavy shadows that have hidden him, and shines on you in gratitude and love. He is himself, but not himself alone. And as his Father lost not part of Him in your creation, so the light in him is brighter still, because you gave your light to him, to save him from the dark. And now the light in you must be as bright as shines in him. This is the spark that shines within the dream; that you can help him waken, and be sure his waking eyes will rest upon you first, and in his glad salvation YOU are saved.

Do you remember what Joyce said about the powers of darkness being massed against the truth? This is what she meant but did not recognize:

There is no external darkness, but there is indeed an internal darkness that can be projected outward, and it seems to mass to attack a real step forward and prevent it from being taken. Why? Because the darkness is frightened by the thought of the light at the end of the tunnel. It does mean its end. And so as we draw nearer…

Urtext – Workbook for Students
338. “I am affected only by my thoughts.”

It needs but this to let salvation come to all the world. For in this single thought is everyone released at last from fear. Now he has learned that no-one frightens him, and nothing can endanger him. He has no enemies, and he is safe from all external things. His thoughts can frighten him, but since these thoughts belong to him alone, he has the power to change them, and exchange each fear thought for a happy thought of love. He crucified himself. Yet God has planned that His beloved Son will be redeemed.

“Your plan is sure, my Father—only Yours. All other plans will fail. And I will have thoughts that will frighten me until I learn that You have given me the only Thought Which leads me to salvation. Mine alone will fail and lead me nowhere. But the Thought You gave me promises to lead me home, because it holds Your promise to Your Son.”