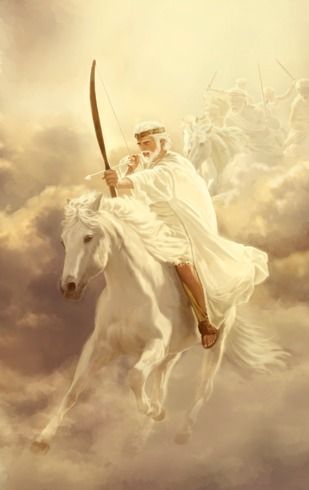 Day 351
Forgiveness RECOGNIZED as merited will heal. It gives the miracle its strength to OVERLOOK illusions. This is how you learn that you must be forgiven too. There CAN be no appearance that can NOT be overlooked. For, if there were, it would be necessary FIRST there be some sin which stands BEYOND forgiveness.
There would be an error that is MORE than a mistake; a special FORM of error, which remains unchangeable, eternal, and beyond correction or escape. There would be one mistake which had the power to UNDO creation, and to make a world which could REPLACE it and DESTROY the Will of God. Only if this were possible could there be SOME appearances which could withstand the miracle, and NOT be healed by it.

There is no surer proof idolatry is what you wish than a belief there are some forms of sickness and of joylessness forgiveness CANNOT cure. This means that you prefer to keep SOME idols, and are not prepared, as yet, to let ALL idols go. And thus you think that SOME appearances are real, and not appearances at all. Be not deceived about the MEANING of a fixed belief that SOME appearances are harder to look past than others are. It ALWAYS means you think forgiveness must be limited. And you have set a goal of partial pardon and a limited escape from guilt FOR YOU. What can this be, except a false forgiveness of YOURSELF, and everyone who seems APART from you?

It MUST be true the miracle can heal ALL forms of sickness, or it CANNOT HEAL. Its purpose cannot be to judge which FORMS are real, and which APPEARANCES are true. If one appearance must remain APART from healing, one illusion must be part of truth. And you could NOT escape all guilt, but only SOME of it. You must forgive God’s Son ENTIRELY. Or you will keep an image of yourself that is not whole, and will remain afraid to look within, and find escape from EVERY idol there. Salvation rests on faith there CANNOT be some forms of guilt which you can NOT forgive. And so there cannot be appearances which have replaced the truth about God’s Son.

Look on your brother with the willingness to see him as he is. And do not keep a part of him outside your willingness that he be healed. To heal is to make whole. And what is whole can HAVE no missing parts that have been kept outside. Forgiveness rests on recognizing this, and being GLAD there cannot be some forms of sickness which the miracle must LACK the power to heal. God’s Son is perfect, or he cannot be God’s Son. Nor will you KNOW him, if you think he does not merit the escape from guilt in ALL its forms and ALL its consequence. There IS no way to think of him but this, if you would know the truth about yourself:

“I thank you, Father, for your perfect Son,
And in his glory will I see my own.”

Here is the joyful statement that there are NO forms of evil which can overcome the Will of God; the glad acknowledgment that guilt has NOT succeeded, by your wish, to make illusions real. And what is this, except a simple statement of the truth? Look on your brother with this hope in you, and you will understand he COULD not make an error that could change the truth in him. It is NOT difficult to overlook mistakes that have been given no effects. But what you see as having power to make an idol of the Son of God, you will NOT pardon. For he has become to you a graven image, and a sign of death. Is THIS your Savior? Is his Father WRONG about His Son? Or have YOU been deceived in him who has been given you to heal for YOUR salvation and deliverance?

Would God have left the meaning of the world to YOUR interpretation? If He had, it HAS no meaning. For it cannot be that meaning changes constantly, and yet is true. The Holy Spirit looks upon the world as with ONE purpose, changelessly established. And NO situation can affect its aim, but MUST be in accord with it. For ONLY if its aim could change with every situation could each one be OPEN to interpretation which is different every time you think of it. You ADD an element into the script you write for every minute in the day, and all that happens now means something else. You TAKE AWAY another element, and every meaning shifts accordingly.

What do your scripts reflect except your plans for what the day SHOULD be? And thus you judge disaster and success, advance, retreat, and gain and loss. These judgments all are made according to the roles the script assigns. The fact they have no meaning in themselves is DEMONSTRATED by the ease with which these labels change with other judgments made on different aspects of experience. And then, in looking back, you think you see ANOTHER meaning in what went before. What have you really done, except to show there WAS no meaning there? And YOU assigned a meaning in the light of goals that change, with EVERY meaning shifting as they change.

(There is an urgency that calls to you. You have a function. Do not now delay. In a little while you will understand. You have been given charge of one way to God. It is direct and sure and true, and there is need for it. You will be shown how it is needed, when to use it, and where it should be taught for continuity.) We must not lose it in this point in time by looking back. The past is meaningless.

Your way will teach this fact. How could it be that God would have the past be shown to you when it will be the lesson you will teach that nothing in the past means anything?
(End of Special Message)

“Who is my brother but Your holy Son? And if I see him sinful, I proclaim myself a sinner; not a Son of God; alone and friendless in a fearful world. Yet this perception is a choice I make, and can relinquish. I can also see my brother sinless, as Your holy Son. And with this choice I see my sinlessness, my everlasting Comforter and Friend beside me, and my way secure andclear. Choose, then, for me, my Father, through Your Voice. For He alone gives judgment in Your Name.”

Email ThisBlogThis!Share to TwitterShare to FacebookShare to Pinterest
Labels: A Course in Miracles, Daily Devotional, Forgiveness, Prayer, Workbook for Students