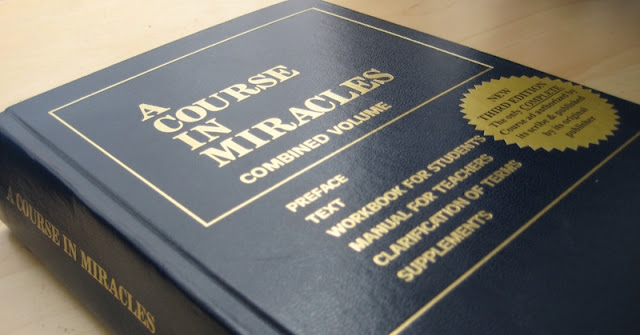 What It Says
The Course does not aim at teaching the meaning of love, for that is beyond what can be taught. It does aim, however, at removing the blocks to the awareness of love’s presence, which is your natural inheritance. The opposite of love is fear, but what is all-encompassing can have no opposite.
The course can therefore be summed up very simply in this way:

Nothing real can be threatened.
Nothing unreal exists.
Herein lies the Peace of God.

This is how A Course in Miracles begins. It makes a fundamental distinction between the real and the unreal; between knowledge and perception. Knowledge is truth, under one law, the law of love or God. Truth is unalterable, eternal and unambiguous. It can be unrecognized, but it cannot be changed. It applies to everything that God created, and only what He created is real. It is beyond learning because it is beyond time and process. It has no opposite; no beginning and no end. It merely is.
The world of perception, on the other hand, is the world of time, of change, of beginnings and endings. It is based on interpretation, not on facts. It is the world of birth and death, founded on the belief in scarcity, loss, separation and death. It is learned rather than given, selective in its perceptual emphases, unstable in its functioning, and inaccurate in its interpretations.

From knowledge and perception respectively, two distinct thought systems arise which are opposite in every respect. In the realm of knowledge no thoughts exist apart from God, because God and His Creation share one Will. The world of perception, however, is made by the belief in opposites and separate wills, in perpetual conflict with each other and with God. What perception sees and hears appears to be real because it permits into awareness only what conforms to the wishes of the perceiver. This leads to a world of illusions, a world which needs constant defense precisely because it is not real.

When you have been caught in the world of perception you are caught in a dream. You cannot escape without help, because everything your senses show merely witnesses to the reality of the dream. God has provided the Answer, the only Way out, the true Helper. It is the function of His Voice, His Holy Spirit, to mediate between the two worlds. He can do this because, while on the one hand He knows the truth, on the other He also recognizes our illusions, but without believing in them. It is the Holy Spirit's goal to help us escape from the dream world by teaching us how to reverse our thinking and unlearn our mistakes. Forgiveness is the Holy Spirit's great learning aid in bringing this thought reversal about. However, the Course has its own definition of what forgiveness really is just as it defines the world in its own way.

The world we see merely reflects our own internal frame of reference the dominant ideas, wishes and emotions in our minds. Projection makes perception. We look inside first, decide the kind of world we want to see and then project that world outside, making it the truth as we see it. We make it true by our interpretations of what it is we are seeing. If we are using perception to justify our own mistakes—our anger, our impulses to attack, our lack of love in whatever form it may take—we will see a world of evil, destruction, malice, envy and despair. All this we must learn to forgive, not because we are being good and charitable, but because what we are seeing is not true. We have distorted the world by our twisted defenses, and are therefore seeing what is not there. As we learn to recognize our perceptual errors, we also learn to look past them or forgive. At the same time we are forgiving ourselves, looking past our distorted self-concepts to the Self that God created in us and as us.

Sin is defined as lack of love. Since love is all there is, sin in the sight of the Holy Spirit is a mistake to be corrected, rather than an evil to be punished. Our sense of inadequacy, weakness and incompletion comes from the strong investment in the scarcity principle that governs the whole world of illusions. From that point of view, we seek in others what we feel is wanting in ourselves. We love another in order to get something ourselves. That, in fact, is what passes for love in the dream world. There can be no greater mistake than that, for love is incapable of asking for anything.
Only minds can really join, and whom God has joined no man can put asunder. It is, however, only at the level of Christ Mind that true union is possible, and has, in fact, never been lost. The little I seeks to enhance itself by external approval, external possessions and external love. The Self that God created needs nothing. It is forever complete, safe, loved and loving. It seeks to share rather than to get; to extend rather than project. It has no needs and wants to join with others out of their mutual awareness of abundance.

The special relationships of the world are destructive, selfish and childishly egocentric. Yet, if given to the Holy Spirit, these relationships can become the holiest things on earth... the miracles that point the way to the return to Heaven. The world uses its special relationships as a final weapon of exclusion and a demonstration of separateness. The Holy Spirit transforms them into perfect lessons in forgiveness and in awakening from the dream. Each one is an opportunity to let perceptions be healed and errors corrected. Each one is another chance to forgive oneself by forgiving the other. And each one becomes still another invitation to the Holy Spirit and to the remembrance of God.

Perception is a function of the body, and therefore represents a limit on awareness. Perception sees through the body's eyes and hears through the body's ears. It evokes the limited responses which the body makes. The body appears to be largely self-motivated and independent, yet it actually responds only to the intentions of the mind. If the mind wants to use it for attack in any form, it becomes prey to sickness, age and decay. If the mind accepts the Holy Spirit's purpose for it instead, it becomes a useful way of communicating with others, invulnerable as long as it is needed, and to be gently laid by when its use is over. Of itself it is neutral, as is everything in the world of perception. Whether it is used for the goals of the ego or the Holy Spirit depends entirely on what the mind wants.

The opposite of seeing through the body's eyes is the vision of Christ, which reflects strength rather than weakness, unity rather than separation, and love rather than fear. The opposite of hearing through the body's ears is communication through the Voice for God, the Holy Spirit, which abides in each of us. His voice seems distant and difficult to hear because the ego, which speaks for the little, separated self, seems to be much louder. This is actually reversed. The Holy Spirit speaks with unmistakable clarity and overwhelming appeal. No one who does not choose to identify with the body could possibly be deaf to His messages of release and hope, nor could he fail to accept joyously the vision of Christ in glad exchange for his miserable picture of himself.

Christ's vision is the Holy Spirit's gift, God's alternative to the illusion of separation and to the belief in the reality of sin, guilt and death. It is the one correction for all errors of perception; the reconciliation of the seeming opposites on which this world is based. Its kindly light shows all things from another point of view, reflecting the thought system that arises from knowledge and making return to God not only possible but inevitable. What was regarded as injustices done to one by someone else now becomes a call for help and for union. Sin, sickness and attack are seen as misperceptions calling for remedy through gentleness and love. Defenses are laid down because where there is no attack there is no need for them. Our bothers' needs become our own, because they are taking the journey with us as we go to God. Without us they would lose their way. Without them we could never find our own.

Forgiveness is unknown in Heaven, where the need for it would be inconceivable. However, in this world, forgiveness is a necessary correction for all the mistakes that we have made. To offer forgiveness is the only way for us to have it, for it reflects the law of Heaven that giving and receiving are the same. Heaven is the natural state of all the Sons of God as He created them. Such is their reality forever. It has not changed because it has been forgotten.

Forgiveness is the means by which we will remember. Through forgiveness the thinking of the world is reversed. The forgiven world becomes the gate of Heaven, because by its mercy we can at last forgive ourselves. Holding no-one prisoner to guilt, we become free. Acknowledging Christ in all our brothers, we recognize His Presence in ourselves. Forgetting all our misperceptions, and with nothing from the past to hold us back, we can remember God. Beyond this, learning cannot go. When we are ready, God Himself will take the final step in our return to Him.

Email ThisBlogThis!Share to TwitterShare to FacebookShare to Pinterest
Labels: A Course in Miracles, Chapter/-s, Daily Devotionals, Introduction/-s, Principles of Miracles, Text only