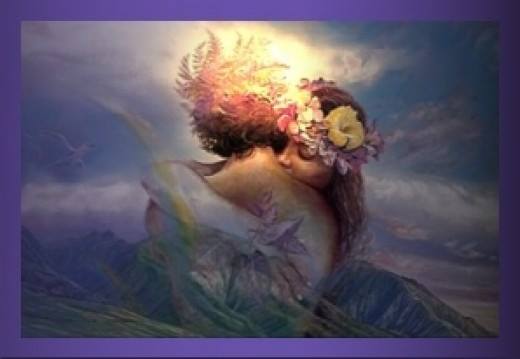 IV.  Fear as Lack of Love

72 You believe that "being afraid" is involuntary, something beyond your control. Yet I have told you several times that only constructive acts should be involuntary. We have said that Christ-control can take over everything that does not matter, while Christ-guidance can direct everything that does if you so choose. Fear cannot be Christ-controlled, but it can be self-controlled. It prevents me from controlling it. The correction is therefore a matter of your will because its presence shows that you have raised the unimportant to a higher level than it warrants. You have thus brought it under your will, where it does not belong. This means that you feel responsible for it. The level confusion here is obvious.

73 The reason I cannot control fear for you is that you are attempting to raise to the mind level the proper content of lower-order reality. I do not foster level confusion, but you can choose to correct it. You would not tolerate insane behavior on your part and would hardly advance the excuse that you could not help it. Why should you tolerate insane thinking? There is a confusion here which you would do well to look at clearly. You believe that you are responsible for what you do but not for what you think. The truth is that you are responsible for what you think because it is only at this level that you can exercise choice.

74 What you do comes from what you think. You cannot separate yourself from the truth by "giving" autonomy to behavior. This is controlled by me automatically as soon as you place what you think under my guidance. Whenever you are afraid, it is a sure sign that you have allowed your mind to miscreate or have not allowed me to guide it. It is pointless to believe that controlling the outcome of mis-thought can result in healing. When you are fearful you have willed wrongly. This is why you feel responsible for it. You must change your mind, not your behavior, and this is a matter of will.

75 You do not need guidance except at the mind level. Correction belongs only at the level where creation is possible. The term does not mean anything at the symptom level, where it cannot work. The correction of fear isyour responsibility. When you ask for release from fear, you are implying that it is not. You should ask instead for help in the conditions which have brought the fear about. These conditions always entail a separated mind willingness. At that level, you can help it. You are much too tolerant of mind wandering, thus passively condoning its miscreations. The particular result does not matter, but the fundamental error does. The correction is always the same. Before you will to do anything, ask me if your will is in accord with mine. If you are sure that it is, there will be no fear.

76 Fear is always a sign of strain, which arises whenever the will to do conflicts with what you do. This situation arises in two ways:

77 First, you can will to do conflicting things, either simultaneously or successively. This produces conflicted behavior, which is intolerable to yourself because the part of the will that wants to do something else is outraged.
78 Second, you can behave as you think you should but without entirely willing to do so. This produces consistent behavior but entails great strain within the self.

79 In both cases, the will and the behavior are out of accord, resulting in a situation in which you are doing what you do not will. This arouses a sense of coercion, which usually produces rage. The rage then invades the mind and projection in the wrong sense is likely to follow. Depression or anxiety is virtually certain.

80 Remember that whenever there is fear, it is because you have not made up your mind. Your will is split, and your behavior inevitably becomes erratic. Correcting at the behavioral level can shift the error from the first to the second type of strain described above but will not obliterate the fear. It is possible to reach a state in which you bring your will under my guidance without much conscious effort, but this implies habit patterns which you have not developed dependably as yet. God cannot ask more than you will. The strength to do comes from your own undivided will to do. There is no strain in doing God's Will as soon as you recognize that it is also your own.

81 The lesson here is quite simple but particularly apt to be overlooked. I will therefore repeat it, urging you to listen. Only your mind can produce fear. It does so whenever it is conflicted in what it wills, thus producing inevitable strain because willing and doing become discordant. This cannot be corrected by better doing, but it canbe corrected by higher willing.

A world forgiven cannot last. It was the home of bodies. But forgiveness looks past bodies. This is its holiness; this is how it heals. The world of bodies is the world of sin, for only if there is a body is sin possible. From sin comes guilt as surely as forgiveness takes all guilt away. And once all guilt is gone what more remains to keep a separated world in place? For place has gone as well, along with time.

Only the body makes the world seem real, for being separate it could not remain where separation is impossible. Forgiveness proves it is impossible because it sees it not. And what you then will overlook will not be understandable to you, just as its presence once had been your certainty.

We have been quite casual about our practice periods thus far. There has been virtually no attempt to direct the time for undertaking them, minimal effort has been required, and not even active cooperation and interest have been asked. This casual approach has been intentional, and very carefully planned. We have not lost sight of the crucial importance of the reversal of your thinking. The salvation of the world depends on it. Yet you will not see if you regard yourself as being coerced, and if you give in to resentment and opposition.

This is our first attempt to introduce structure. Do not misconstrue it as an effort to exert force or pressure. You want salvation. You want to be happy. You want peace. You do not have them now because your minds are totally undisciplined, and you cannot distinguish between joy and sorrow, pleasure and pain, love and fear. You are now learning how to tell them apart. And great indeed will be your reward.

Your decision to see is all that vision requires. What you want is yours. Do not mistake the little effort that is asked of you for a sign that our goal is of little worth. Can the salvation of the world be a trivial purpose? And can the world be saved if you are not? God has one Son, and he is the resurrection and the life. His will is done because all power is given him in Heaven and on earth. In your determination to see is vision given you.

The exercises for today consist in reminding yourselves throughout the day that you want to see. Today’s idea also tacitly implies the recognition that you do not see now. Therefore, as you repeat the idea, you are stating that you are determined to change your present state for a better one, and one you really want.

Repeat today’s idea slowly and positively at least twice an hour today, attempting to do so every half hour. Do not be distressed if you forget to do so, but make a real effort to remember. The extra repetitions should be applied to any situation, person or event which upsets you. You can see them differently, and you will. What you desire you will see. Such is the real law of cause and effect as it operates in the world.