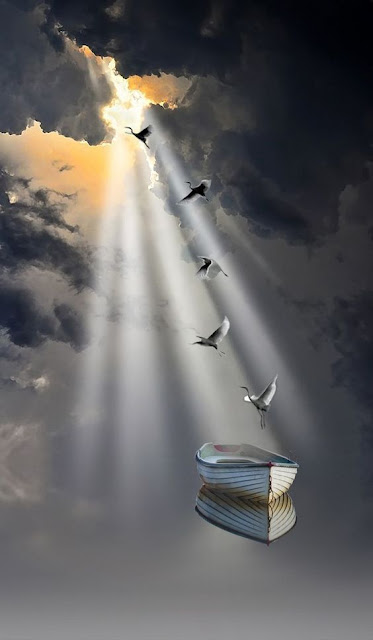 Day 141
Would YOU remember the Father? Accept His Son and you WILL remember Him. Nothing can demonstrate that His Son is unworthy, for nothing can prove that a lie is true. What you see of His Son through the eyes of the ego is a demonstration that His Son does not exist, yet where the Son is, the Father MUST be. Accept what God does NOT deny, and HE will demonstrate its truth. The witnesses for God stand in His Light and behold what HE created. Their silence is the sign that they have beheld God’s Son, and in the Presence of Christ, THEY need demonstrate nothing, for Christ speaks to them of Himself and of His Father. They are silent because Christ speaks to them, and it is His words that THEY speak.

Every brother you meet becomes a witness for Christ or for the ego, depending on what you perceive in him. Everyone convinces you of WHAT YOU WANT TO PERCEIVE, and of the reality of the Kingdom you have chosen for your vigilance. Everything you perceive is a witness to the thought-system YOU WANT TO BE TRUE. Every brother has the power to release you, IF YOU WILL TO BE FREE. You cannot accept false witness of him, unless you have evoked false witnesses AGAINST him. If HE speaks not of Christ to YOU, YOU spoke not of Christ to him. You hear but your own voice, and if Christ speaks through you, YOU will hear Him.

It is impossible not to believe what you see, but it is equally impossible to see what you do NOT believe. Perceptions are built up on the basis of experience, and experience leads to beliefs. It is not until BELIEFS are fixed that perceptions stabilize. In effect, then, what you believe you DO see. That is what I meant when I said, “Blessed are ye who have not seen and still believe,”
for those who believe in the resurrection WILL see it. The resurrection is the complete triumph of Christ over the ego, not by attack, but by transcendence. For Christ DOES rise above the ego and all its works, and ascends to the Father and HIS Kingdom.

Would you join in the resurrection or the crucifixion? Would you condemn your brothers or free them? Would you transcend YOUR prison and ascend to the Father? For these questions are all the same, and are answered together. There has been much confusion about what perception means, because the same word is used both for awareness and for the INTERPRETATION of awareness. Yet you cannot BE aware without interpretation, and what you perceive IS your interpretation. This course is perfectly clear. You do not see it clearly because you are interpreting AGAINST it, and therefore do not BELIEVE it. And if belief determines perception, you do NOT perceive what it means and therefore do not ACCEPT it.

Yet different experiences lead to different beliefs, and with them different perceptions. For perceptions are learned WITH beliefs, and experience teaches. I am leading you to a new kind of experience which you will become less and less willing to deny. Learning of Christ is easy, for to perceive with Him involves no strain at all. HIS perceptions are your NATURAL awareness, and it is only the distortions which YOU introduce that tire you. Let the Christ in you interpret FOR you, and do not try to limit what you see by narrow little beliefs which are unworthy of God’s Son. For until Christ comes into His Own, the Son of God WILL see himself as fatherless.

I am YOUR resurrection and YOUR life. You live in me because you live in God. And everyone lives in YOU, as YOU live in everyone. Can you, then, perceive unworthiness in a brother and NOT perceive it in yourself? And can you perceive it in yourself and NOT perceive it in God? Believe in the resurrection because it has BEEN accomplished, and it has been accomplished IN YOU. This is as true now as it will ever be. For the resurrection is the Will of God, Which knows no time and no exceptions. But make no exceptions yourself, or you will not perceive what has been accomplished FOR you. For we ascend unto the Father together, as it was in the beginning, is now, and ever shall be, for such is the nature of God’s Son as His Father created him.

Do not underestimate the power of the devotion of God’s Son, nor the power of the god he worships over him. For he places HIMSELF at the altar of his god, whether it be the god he made or the God Who created him. That is why his slavery is as complete as his freedom, for he will obey ONLY the god he accepts. The god of the crucifixion demands that he crucify, and his worshippers obey. In his name they crucify THEMSELVES, believing that the power of the Son of God is born of sacrifice and pain. The God of the resurrection demands nothing, for He does not will to TAKE AWAY. He does not require obedience, for obedience implies submission. He would only have you learn your OWN will and follow it, not in the spirit of sacrifice and submission, but in the gladness of freedom.

Urtext – Manual for Teachers (How are Healing and Atonement Related? cont.,)

When a teacher of God fails to heal, it is because he has forgotten Who he is. Another’s sickness thus becomes his own. In allowing this to happen, he has identified with another’s ego, and has thus confused him with a body. In so doing, he has refused to accept Atonement for himself, and can hardly offer it to his brother in Christ’s Name. He will, in fact, be unable to recognize his brother at all, for his Father did not create bodies, and so he is seeing in a brother only the unreal. Mistakes do not correct mistakes, and distorted perception does not heal. Step back now, teacher of God. You have been wrong. Lead not the way, for you have lost it. Turn quickly to your Teacher, and let yourself be healed.

The offer of Atonement is universal. It is equally applicable to all individuals in all circumstances. And in it is the power to heal all individuals of all forms of sickness. Not to believe this is to be unfair to God, and thus unfaithful to Him. A sick person perceives himself as separate from God. Would you see him as separate from you? It is your task to heal the sense of separation that has made him sick. It is your function to recognize for him that what he believes about himself is not the truth. It is your forgiveness that must show him this. Healing is very simple. Atonement is received and offered. Having been received, it must be accepted. It is in the receiving, then, that healing lies. All else must follow from this single purpose.

R4:1 Now we review again, this time aware we are preparing for the second part of learning how the truth can be applied. Today we will begin to concentrate on readiness for what will follow next. Such is our aim for this review and for the lessons following. Thus we review the recent lessons and their central thoughts in such a way as will facilitate the readiness which we would now achieve.

2 There is a central theme that unifies each step in the review we undertake, which can be simply stated in these words:

3 My mind holds only what I think with God.

5 Let us begin our preparation with some understanding of the many forms in which the lack of true forgiveness may be carefully concealed. Because they are illusions, they are not perceived to be but what they are—defenses which protect your unforgiving thoughts from being seen and recognized. Their purpose is to show you something else and hold correction off through self-deceptions made to take its place.

6 And yet your mind holds only what you think with God. Your self-deceptions cannot take the place of truth. No more than can a child who throws a stick into the ocean change the coming and the going of the tides, the warming of the water by the sun, the silver of the moon on it by night. So do we start each practice period in this review with readying our minds to understand the lessons that we read and see the meaning which they offer us.

7 Begin each day with time devoted to the preparation of your mind to learn what each idea you will review that day can offer you in freedom and in peace. Open your mind and clear it of all thoughts that would deceive, and let this thought alone engage it fully and remove the rest:

8 My mind holds only what I think with God.

9 Five minutes with this thought will be enough to set the day along the lines which God appointed and to place His Mind in charge of all the thoughts you will receive that day. They will not come from you alone, for they will all be shared with Him. And so each one will bring the message of His Love to you, returning messages of yours to Him. So will communion with the Lord of Hosts be yours, as He Himself has willed it be. And as His own completion joins with Him, so will He join with you who are complete as you unite with Him and He with you.

10After your preparation, merely read each of the two ideas assigned to you to be reviewed that day. Then close your eyes and say them slowly to yourself. There is no hurry now, for you are using time for its intended purpose. Let each word shine with the meaning God has given it as it was given to you through His Voice. Let each idea that you review that day give you the gift which He has laid in it for you to have of Him. And we will use no format for our practicing but this:

11 Each hour of the day bring to your mind the thought with which the day began and spend a quiet moment with it. Then repeat the two ideas you practice for the day unhurriedly, with time enough to see the gifts which they contain for you, and let them be received where they were meant to be. We add no other thoughts, but let them be the messages they are. We need no more than this to give us happiness and rest and endless quiet, perfect certainty, and all our Father wills that we receive as the inheritance we have of Him.

12 Each day of practicing, as we review, we close as we began, repeating first the thought that made the day a special time of blessing and of happiness for us and through our faithfulness restored the world from darkness to the light, from grief to joy, from pain to peace, from sin to holiness. God offers thanks to you who practice thus the keeping of His Word. And as you give your mind to the ideas for the day again before you sleep, His gratitude surrounds you in the peace wherein He wills you be forever and are learning now to claim again as your inheritance.

My mind holds only what I think with God.

[121] Forgiveness is the key to happiness.

[122] Forgiveness offers everything I want.