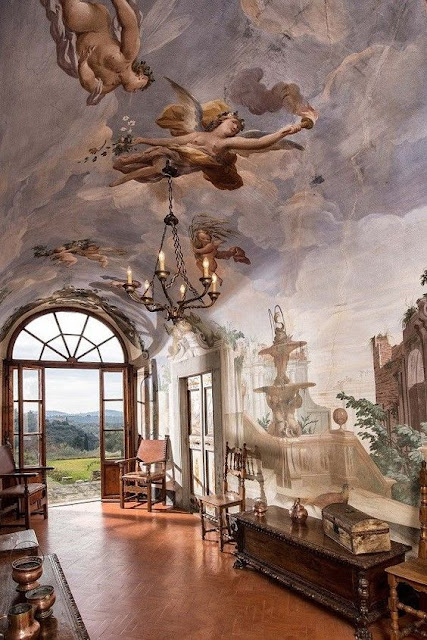 Day 210
The Bridge to the Real World
The search for the special relationship is the sign that you equate yourself with the ego, and NOT with God. For the special relationship has value ONLY to the ego. To IT, UNLESS a relationship HAS special value, IT HAS NO MEANING. And it perceives ALL love as special. Yet this CANNOT be natural, for it is UNlike the relationship of God and His Son, and ALL relationships that are unlike this One, MUST be unnatural. For God created love as He would have it be, and GAVE it as it IS. Love HAS no meaning except as its Creator defined it, by His Will. It is impossible to define it otherwise, and UNDERSTAND it.


LOVE IS FREEDOM. To look for it by placing yourself in BONDAGE, is to SEPARATE yourself from it. For the love of God, no longer seek for union in separation, nor for freedom in bondage! As you release, so will you BE released. FORGET THIS NOT, or love will be unable to find you, and comfort you. There is a way in which the Holy Spirit asks YOUR help, if you would have His. The holy instant is His most helpful tool in protecting you from the attraction of guilt, the REAL lure in the special relationship. You do NOT recognize that this IS its REAL appeal, for the ego has taught you that FREEDOM lies in it.

YOU SEE THE WORLD YOU VALUE. On this side of the bridge, you see the world of separate bodies, seeking to join each other in SEPARATE UNIONS, and to become one BY LOSING. When two INDIVIDUALS seek to become ONE, they are trying to DECREASE their magnitude. Each would DENY his power, for the SEPARATE union EXCLUDES THE UNIVERSE. Far more is LEFT OUTSIDE than would be taken in. For God is left WITHOUT, and NOTHING taken in. If one such union were made IN PERFECT FAITH, the universe WOULD enter into it. Yet the special relationship which the EGO seeks, does NOT include even ONE whole individual. For the ego WANTS but part of him, and sees ONLY this part, and nothing else.

Across the bridge, it is so different! For a time the body is still seen, but NOT exclusively, as it is seen here. For the little spark that holds the Great Rays within it is ALSO visible, and this spark cannot be limited long to littleness. Once you have crossed the bridge, the VALUE of the body is so diminished in YOUR sight, that you will see no need at all to MAGNIFY it. For you will realize that the ONLY value that the body has, is to enable you to bring your brothers TO the bridge WITH you. And to be RELEASED TOGETHER there.

The bridge itself is nothing more than a transition in your PERSPECTIVE of reality. On this side, everything you see is grossly distorted, and COMPLETELY out of perspective. What IS little and insignificant is magnified, and what is strong and powerful, cut down to littleness. In the transition, there is a period of confusion, in which a sense of actual disorientation seems to occur. But fear it not, for it means nothing more than that you have been willing to LET GO your hold on the distorted frame of reference that SEEMED to hold your world together. This frame of reference is BUILT around the special relationship. Without THIS illusion, there can BE no meaning you would still seek here.

Fear not that you will be abruptly lifted up, and hurled into reality. Time is kind, and, if you use it FOR reality, it will keep gentle pace with you, in your transition. The urgency is only in dislodging your minds from their FIXED POSITION here. This will not leave you homeless, and WITHOUT a frame of reference. The period of disorientation, which precedes the actual transition, is far shorter than the time it took to fix your minds so firmly on illusions. Delay will hurt you now MORE THAN BEFORE, ONLY because you realize it IS delay, and that escape from pain IS REALLY POSSIBLE. Find hope and comfort, rather than despair, in this therefore.

You could no longer find even the ILLUSION of love in ANY special relationship here. For you are no longer WHOLLY insane, and you WOULD recognize the guilt of SELF-betrayal FOR WHAT IT IS. Nothing you seek to strengthen, in the special relationship, is REALLY part of you. And you cannot keep PART of the thought-system that taught you it WAS real, and understand the Thought that REALLY knows what you are. You HAVE allowed the Thought of your reality to enter your minds, and, because YOU invited it, it WILL abide with you. Your love for it will not allow you to betray yourself, and you COULD not enter into a relationship WHERE IT COULD NOT GO WITH YOU, for you would NOT be APART from it.

A madman will defend his own illusions because in them he sees his own salvation. Thus, he will attack the one who tries to save him from them, believing that he is attacking him. This curious circle of attack-defense is one of the most difficult problems with which the psychotherapist must deal. In fact, this is his central task; the core of psychotherapy. The therapist is seen as one who is attacking the patient's most cherished possession; his picture of himself. And since this picture has become the patient's security as he perceives it, the therapist cannot but be seen as a real source of danger, to be attacked and even killed.

The psychotherapist, then, has a tremendous responsibility. He must meet attack without attack, and therefore without defense. It is his task to demonstrate that defenses are not necessary, and that defenselessness is strength. This must be his teaching, if his lesson is to be that sanity is safe. It cannot be too strongly emphasized that the insane believe that sanity is threat. This is the corollary of the “original sin”: the belief that guilt is real and fully justified. It is therefore the psychotherapist’s function to teach that guilt, being unreal, cannot be justified. But neither is it safe. And thus it must remain unwanted as well as unreal.

190. “I choose the joy of God instead of pain.”
Pain is my own idea. It is not
a thought of God, but one I thought apart
from Him and from His Will. His Will is joy
and only joy for His beloved Son.
And that I choose instead of what I made.