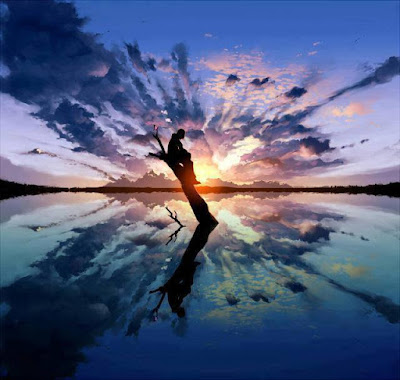 Very few people appreciate the real power of the mind. Nobody remains fully aware of it all the time. This is inevitable in this world, because the human being has many things he must do, and cannot engage in constant thought-watching. However, if he hopes to spare himself from fear, there are some things he must realize, and realize them fully, at least some of the time.
The mind is a very powerful creator, and it never loses its creative force. It never sleeps. Every instant it is creating, and ALWAYS as you will. Many of your ordinary expressions reflect this. For example, when you say “don’t give it a thought,” you are implying that if you do not think about something, it will have no effect on you. This is true enough.

On the other hand, many other expressions are clear expressions of the prevailing LACK of awareness of thought-power. For example, you say, “just an idle thought,” and mean that the thought has no effect. You also speak of some actions as “thoughtless,” implying that if the person HAD thought, he would not have behaved as he did. You also use phrases like “thought provoking,” which is bland enough, but the term “a provoking thought” means something quite different.

While expressions like “think big” give some recognition to the power of thought, they still come nowhere near the truth. You do not expect to grow when you say it, because you don’t really believe it. It is hard to recognize that thought and belief combine into a power-surge that can literally move mountains.

It appears at first glance that to believe such power about yourself is merely arrogant, but that is not the real reason why you don’t believe it.

People prefer to believe that their thoughts cannot exert real control because they are literally AFRAID of them. Therapists try to help people who are afraid of their own death wishes by depreciating the power of the wish. They even attempt to “free” the patient by persuading him that he can think whatever he wants, without ANY real effect at all.

There is a real dilemma here, which only the truly right-minded can escape. Death wishes do not kill in the physical sense, but they DO kill spiritually. ALL destructive thinking is dangerous. Given a death wish, a man has no choice except to ACT upon his thought, or behave CONTRARY TO it. He can thus choose ONLY between homicide and fear.

The other possibility is that he depreciates the power of his thought. This is the usual psychoanalytic approach. This DOES allay guilt, but at the cost of rendering thinking impotent. If you believe that what you think is ineffectual, you may cease to be overly afraid of it, but you are hardly likely to respect it, either. The world is full of endless examples of how man has depreciated himself because he is afraid of his own thoughts. In some forms of insanity, thoughts are glorified, but this is only because the underlying depreciation was too effective for tolerance.

The truth is that there ARE no “idle thoughts.” ALL thinking produces form at some level. The reason why people are afraid of ESP, and so often react against it, is because they KNOW that thought can hurt them. Their OWN thoughts have made them vulnerable.

You and Bill, who complain all the time about fear, still persist in creating it most of the time. I told you last time that you cannot ask ME to release you from it, because I KNOW it does not exist. YOU don’t. If I merely intervene between your thoughts and their results, I would be tampering with a basic law of cause and effect, in fact the most fundamental one there is in this world. I would hardly help if I depreciated the power of your own thinking. This would be in direct opposition to the purpose of this course.

It is certainly much more useful to remind you that you do not guard your thoughts at all carefully, except for a relatively small part of the day, and somewhat inconsistently even then. You may feel at this point that it would take a miracle to enable you to do this, which is perfectly true. Human beings are not used to miraculous thinking, but they CAN be TRAINED to think that way.

All miracle-workers HAVE to be trained that way. I have to be able to count on them. This means that I cannot allow them to leave their mind unguarded, or they will not be able to help me. Miracle-working entails a full realization of the power of thought, and real avoidance of miscreation.

Otherwise, the miracle will be necessary to set the mind ITSELF straight, a circular process which would hardly foster the time-collapse for which the miracle was intended. Nor would it induce the healthy respect that every miracle-worker must have for true Cause and Effect.

Miracles cannot free the miracle-worker from fear. Both miracles AND fear come from his thoughts, and if he were not free to choose one, he would also not be free to choose the other. Remember, we said before that when electing one person, you reject another.

It is much the same in electing the miracle. By so doing, you HAVE rejected fear. Fear cannot assail unless it has been created. You and Bill have been afraid of God, of me, of yourselves, and of practically everyone you know at one time or another. This can only be because you have miscreated all of us, and believe in what you have created. (We spent a lot of time on this before, but it did not help very much.) You would never have done this if you were not afraid of your own thoughts. The vulnerable are essentially miscreators, because they misperceive Creation.

You and Bill are willing to accept primarily what does NOT change your minds too much, and leaves you free to leave them quite unguarded most of the time. You persist in believing that when you do not consciously watch your mind, it is unmindful.

You ARE a stranger here, but you belong to Him Who loves you as He loves Himself. Ask but my help to roll the stone away, and it is done according to His Will.

We HAVE begun the journey. Long ago the end was written in the stars and set into the Heavens with a shining Ray that held it safe within eternity and through all time as well. And holds it still; unchanged, unchanging and unchangeable.

Be not afraid. We only start again an ancient journey long ago begun that but seems new. We have begun again upon a road we travelled on before and lost our way a little while. And now we try again. Our new beginning has the certainty the journey lacked ‘til now. Look up and see His Word among the stars, where He has set your Name along with His. Look up and find your certain destiny the world would hide but God would have you see.

The idea for today begins to describe the conditions that prevail in the other way of seeing. Peace of mind is clearly an internal matter. It must begin with your own thoughts, and then extend outward. It is from your peace of mind that a peaceful perception of the world arises.

Three longer practice periods are required for today’s exercises. One in the morning and one in the evening are advised, with an additional one to be undertaken at any time in between which seems most conducive to readiness. All applications should be done with your eyes closed. It is your inner world to which the applications of today’s idea should be made.

Some five minutes of mind searching are required for each of the longer practice periods. Search your mind for fear thoughts, anxiety provoking situations, “offending” personalities or events, or anything else about which you are harboring unloving thoughts. Note them all casually, repeating the idea for today slowly as you watch them arise in your mind, and let each one go, to be replaced by the next.

If you begin to experience difficulty in thinking of specific subjects, continue to repeat the idea to yourself in an unhurried manner, without applying it to anything in particular. Be sure, however, not to make any specific exclusions.

The shorter applications are to be frequent, and made whenever you feel your peace of mind is threatened in any way. The purpose is to protect yourself from temptation throughout the day. If a specific form of temptation arises in your awareness, the exercise should take this form:

“I could see peace in this situation instead of what I now see in it.”

If the inroads on your peace of mind take the form of more generalized adverse emotions, such as depression, anxiety or worry, use the idea in its original form. If you find you need more than one application of today’s idea to help you change your mind in any specific context, try to take several minutes and devote them to repeating the idea until you feel some sense of relief. It will help you if you tell yourself specifically:

“I can replace my feelings of depression, anxiety or worry [or my thoughts about this situation, personality or event] with peace.”