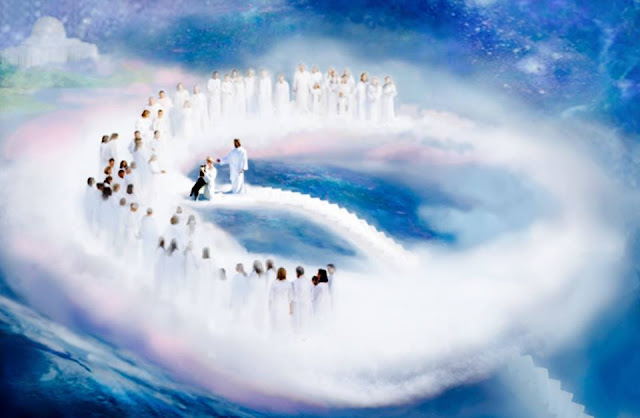 1. The miracle abolishes the need for lower order concerns. Since it is an illogical, or out-of-pattern time interval, by definition, the ordinary considerations of time and space do not apply.
(For example,) I do NOT regard time as you and Bill do, and Kolb’s space problem is NOT mine. When YOU perform a miracle, I will arrange both time and space to adjust to it.

2. Clear distinction between what HAS BEEN Created and what IS BEING created is essential. ALL forms of correction (or healing) rest on this FUNDAMENTAL correction in level perception.

3. Another way of stating 2) is: NEVER confuse right with wrong-mindedness. Responding to ANY form of miscreation with anything EXCEPT a DESIRE TO HEAL (or a miracle) is an expression of this confusion.

4. The miracle is ALWAYS a DENIAL of this error, and an affirmation of the truth. Only Right-Mindedness CAN create in a way that has any real effect. Pragmatically, what has no real effect, has no real existence. Its REAL effect, then, is emptiness. Being without substantial content, it lends itself to projection.

5. The level-adjustment power of the miracle creates the right perception for healing. Until this has occurred, healing cannot be understood. Forgiveness is an empty gesture, unless it entails correction. Without this, it is essentially judgmental, rather than healing.

6. Miraculous forgiveness is ONLY correction. It has no element of judgment at all. “Father forgive them for they know not what they do” in NO way EVALUATES what they do. It is strictly limited to an appeal to God to HEAL their minds. There is no reference to the outcome of their mis-thought. THIS does not matter.

7. The Biblical injunction “Be of one mind” is the statement for REVELATION readiness. My OWN injunction “Do this in remembrance of me” is the request for cooperation in miracle-working. It should be noted that the two statements are not in the same order of reality, because the latter involves a time awareness, since memory implies recalling the PAST in the present. Time is under MY direction, but Timelessness belongs to God alone. In time, we exist for and with each other. In Timelessness, we coexist with God.

There is one more point which must be perfectly clear before any residual fear which may still be associated with miracles becomes entirely groundless. The Crucifixion did NOT establish the Atonement. The Resurrection did. This is a point which many very sincere Christians have misunderstood. Nobody who was free of the scarcity-fallacy could POSSIBLY have made this mistake.

If the Crucifixion is seen from an upside down point of view, it certainly does appear AS IF God permitted, and even encouraged, one of his Sons to suffer BECAUSE he was good. Many very devoted ministers preach this every day. This particularly unfortunate interpretation, which actually arose out of the combined mis-projection of a large number of my own would-be followers, has led many people to be bitterly afraid of God.

This particularly anti-religious concept happens to enter into many religions, and this is neither by chance nor coincidence.

The real Christian would have to pause and ask “how could this be?” Is it likely that God Himself would be capable of the kind of thinking which His own Words have clearly stated is unworthy of man?

The best defense, as always, is NOT to attack another’s position, but rather to protect the truth. It is not necessary to consider anything acceptable, if you have to turn a whole frame of reference around in order to justify it. This procedure is painful in its minor applications, and genuinely tragic on a mass basis. Persecution is a frequent result, justified by the terrible mis-projection that God Himself persecuted His own Son on behalf of salvation. The very words are meaningless.

It has always been particularly difficult to overcome this because, although the error itself is no harder to overcome than any other error, men were unwilling to give it up because of its prominent escape value. In milder forms, a parent says “This hurts me more than it hurts you,” and feels exonerated in beating a child. Can you believe that the Father REALLY thinks this way?

It is so essential that all such thinking be dispelled that we must be VERY sure that NOTHING of this kind remains in your mind. I was NOT punished because YOU were bad. The wholly benign lesson which the Atonement teaches is wholly lost if it is tainted with this kind of distortion in ANY form.

“Vengeance is Mine sayeth the Lord” is strictly a karmic viewpoint. It is a real misperception of truth, by which man assigns his own evil past to God. The “evil conscience” from the past has nothing to do with God. He did not create it, and He does not maintain it. God does NOT believe in karmic retribution at all. His Divine mind does not create that way. HE does not hold the evil deeds of a man even against HIMSELF. Is it likely, then, that He would hold against any man the evil that ANOTHER did?

Be very sure that you recognize how impossible this assumption really is, and how ENTIRELY it arises from mis-projection. This kind of error is responsible for a host of related fallacies, including the misbelief that God rejected man and forced him out of the Garden of Eden, or that I am misdirecting you. I have made every effort to use words which are ALMOST impossible to distort, but man is very inventive when it comes to twisting symbols around.

God Himself is not symbolic; He is FACT. The Atonement, too, is totally without symbolism. It is perfectly clear, because it exists in light. Only man’s attempts to shroud it in darkness have made it inaccessible to the unwilling, and ambiguous to the partly willing. The Atonement itself radiates nothing but truth. It therefore epitomizes harmlessness, and sheds ONLY blessing. It could not do this if it arose from anything other than perfect innocence! Innocence is wisdom, because it is unaware of evil, which does not exist. It is, however, PERFECTLY aware of EVERYTHING that is true.

The Resurrection demonstrated that NOTHING can destroy truth. Good can withstand ANY form of evil, because light abolishes ALL forms of darkness. The Atonement is thus the perfect lesson. It is the final demonstration that all of the other lessons which I taught are true.

Urtext – Manual for Teachers (Who Are God’s Teachers? continued)

There is a course for every teacher of God. The form of the course varies greatly. So do the particular teaching aids involved. But the content of the course never changes. Its central theme is always, “God's Son is guiltless, and in his innocence is his salvation.” It can be taught by actions or thoughts; in words or soundlessly; in any language or in no language; in any place or time or manner. It does not matter who the teacher was before he heard the Call. He has become a savior by his answering.

He has seen someone else as himself. He has therefore found his own salvation and the salvation of the world. In his rebirth is the world reborn.

The idea for today combines two very powerful thoughts, both of major importance. It also sets forth a cause and effect relationship which explains why you cannot fail in your efforts to achieve the goal of the course. You will see because it is the Will of God. It is His strength, not your own, that gives you power. And it is His gift to you, rather than your own, which offers vision to you.

God is indeed your strength. And what He gives is truly given. This means that you can receive it any time and anywhere, wherever you are and in whatever circumstances you find yourself. Your passage through time and space is not random. You cannot but be in the right place at the right time. Such is the strength of God. Such are His gifts.

We will have two three-to-five-minute longer exercise periods today, one as soon as possible after you wake, and another as close as possible to the time you go to sleep. It is better, however, to wait until you can sit quietly by yourself at a time when you feel ready than it is to be concerned with the time as such.

Begin the practice period by repeating the idea for today slowly, with eyes open, looking about you. Then close your eyes and repeat the idea again, quite slowly. After this, try to think of nothing except thoughts which occur to you in relation to today’s idea. You might think, for example:

“God’s gifts to me must be mine, because He gave them to me.”

Whatever thought that is clearly related to the idea itself is suitable. You may, in fact, be astonished at the amount of course related understanding some of your own thoughts contain. Let them come without censoring unless you realize your mind is merely wandering, and you have let obviously irrelevant thoughts intrude. You may also reach a point where no thoughts at all seem to come to mind. If such interferences occur, open your eyes and repeat the thought once more while looking slowly about; close your eyes, repeat the idea once more, and then continue to look for related thoughts in your mind.

Remember, though that active searching is not appropriate for today’s exercises. Try merely to step back and let the thoughts come. If you find this difficult, it is better to spend the practice period alternating between slow repetitions of the idea with eyes open, then closed, then open, and so on, than it is to strain in order to find suitable thoughts.

There is no limit on the number of short practice periods which would be most beneficial. The idea for the day is a beginning step in bringing thoughts together and teaching you that what you are studying is a unified thought system in which nothing is lacking that is needed, and nothing is included that is contradictory or irrelevant.