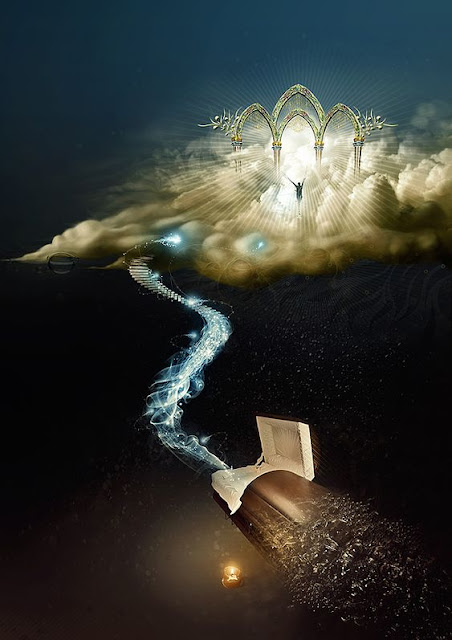 Day 231
Dreams and the Body
THERE IS NOTHING OUTSIDE YOU. That is what you must ultimately learn, for it is in that realization that the Kingdom of Heaven is restored to you. For God created only this, and He did not depart from it, nor leave it separate from Himself. The Kingdom of Heaven is the dwelling place of the Son of God, who left not his Father, and dwells not apart from Him. Heaven is not a place nor a condition. It is merely an awareness of perfect Oneness, and the knowledge that there is nothing else. Nothing OUTSIDE THIS Oneness, and NOTHING ELSE within.

What could God give, but knowledge of Himself? What else IS there to give? The belief that you could give AND GET something, else, something OUTSIDE yourself, has cost you the awareness of Heaven, and the loss of knowledge of your identity. And you have done a stranger thing than you yet realize. You have displaced your guilt to your bodies, FROM YOUR MINDS. Yet a body CANNOT be guilty, for it can do nothing of itself. You who think you hate your bodies, deceive yourselves.

YOU HATE YOUR MINDS, for guilt has entered into them, and they would remain separate, which they CANNOT DO.

Minds ARE joined; bodies are not. Only by assigning to the mind the properties OF THE BODY, does separation SEEM to be possible. And it is MIND that seems to be fragmented and private and ALONE. Its guilt, which KEEPS it separate, is projected to the body, which suffers and dies, BECAUSE IT IS ATTACKED to hold the separation in the mind, and let it NOT KNOW its unity.

Mind cannot attack, but it CAN make fantasies, and direct the body to act them out. But it is never what the BODY does that seems to satisfy. Unless the mind BELIEVES the body is ACTUALLY acting out ITS fantasies, it will attack the body by INCREASING the projection of its guilt upon it.

In this, the mind is CLEARLY delusional. It cannot attack, but maintains it CAN, and USES what it does to hurt the body, to PROVE it can. The mind cannot attack, but it CAN deceive itself. And this is ALL it does, when it believes it has attacked the body, It CAN project its guilt, but it will NOT lose it through projection. And though it clearly can MISPERCEIVE the function of the body, it CANNOT change its function from what the Holy Spirit ESTABLISHES it to be. The body was NOT made by love. But love does not condemn it, and can use it lovingly, respecting what the Son of God has made, and using it to SAVE him from illusions.

Would you not have the instruments of separation RE-INTERPRETED as means for salvation, and USED for purposes of love? Would you not welcome AND SUPPORT the shift from fantasies of vengeance to RELEASE from them? Your PERCEPTION of the body can clearly be sick, but project this not upon the body. For your wish to make destructive what CANNOT destroy, can have no REAL effect at all. And what God created is only what He would have it be, being His Will.

You cannot make His Will destructive. You can make FANTASIES, in which your will CONFLICTS with His, but that is all. It is insane to use the body as the scapegoat for guilt; DIRECTING its attack, and BLAMING it for what you wished it to do. IT IS IMPOSSIBLE TO ACT OUT FANTASIES. For it is still the FANTASIES you want, and they have nothing to do with what the body does. IT does not dream of them, and they but make IT a liability, where it COULD be an asset. For fantasies have made your body your “enemy,” weak, vulnerable, and treacherous, “worthy” of the hate which you invest in it.

How has this served you? You have IDENTIFIED with this thing you hate, the instrument of vengeance, and the perceived source of your guilt. YOU have done this to a thing that has no meaning, proclaiming it to be the dwelling place of the Son of God, and turning it AGAINST him.

This is the host of God that YOU have made. And neither God nor His most holy Son can enter an abode which harbors hate, and where you have sown the seeds of vengeance, violence, and death.
This thing you made to serve your guilt, stands between you and other minds. The minds ARE joined, but you do not IDENTIFY with them. You SEE yourself as locked in a separate prison, remote and unreachable, incapable of reaching out as being reached. You HATE the prison that you made, and would destroy it. Yet you would NOT escape from it, leaving it unharmed, WITHOUT your guilt upon it. But only thus CAN you escape. The home of vengeance is not yours; the place you set aside to house your hatred is NOT a prison, but an ILLUSION OF YOURSELF.

Something good must come from every meeting of patient and therapist. And that good is saved for both, against the day when they can recognize that only that was real in their relationship. At that moment it is returned to them, blessed by the Holy Spirit as a gift from their Creator as a sign of His Love. For the therapeutic relationship must become like the relationship of the Father and the Son.

There is no other, for there is nothing else. The therapists of this world do not expect this outcome, and many of their patients would not be able to accept help from them if they did. Yet no therapist really sets the goal for the relationships of which he is a part. His understanding begins with recognizing this, and then goes on from there.

Urtext – Workbook for Students
What is Salvation?

Salvation is a promise, made by God, that you would find your way to Him at last. It cannot not be kept. It guarantees that time will have an end, and all the thoughts that have been born in time will end as well. God’s Word is given every mind which thinks that it has separate thoughts, and will replace these thoughts of conflict with the Thought of peace.

The Thought of peace was given to God’s Son the instant that his mind had thought of war. There was no need for such a Thought before, for peace was given without opposite, and merely was. But when the mind is split there is a need of healing. So the Thought Which has the power to heal the split became a part of every fragment of the mind that still was one, but failed to recognize its oneness. Now it did not know itself, and thought its own identity was lost.

Salvation is undoing in the sense that it does nothing, failing to support the world of dreams and malice. Thus it lets illusions go. By not supporting them, it merely lets them quietly go down to dust. And what they hid is now revealed; an altar to the holy Name of God whereon His Word is written, with the gifts of your forgiveness laid before It, and the memory of God not far behind.
Let us come daily to this holy place, and spend a while together. Here we share our final dream. It is a dream in which there is no sorrow, for it holds a hint of all the glory given us by God. The grass is pushing through the soil, the trees are budding now, and birds have come to live within their branches. Earth is being born again in new perception. Night has gone, and we have come together in the light.

From here we give salvation to the world, for it is here salvation was received. The song of our rejoicing is the call to all the world that freedom is returned, that time is almost over, and God’s Son has but an instant more to wait until his Father is remembered, dreams are done, eternity has shined away the world, and only Heaven now exists at all.

“What can I seek for, Father, but Your Love? Perhaps I think I seek for something else;
a something I have called by many names. Yet is Your Love the only thing I seek,
or ever sought. For there is nothing else that I could ever really want to find.
Let me remember You. What else could I desire but the truth about myself?”

This is your will, my brother. And you share this will with me, and with the One as well Who is our Father. To remember Him is Heaven. This we seek. And only this is what it will be given us to find.