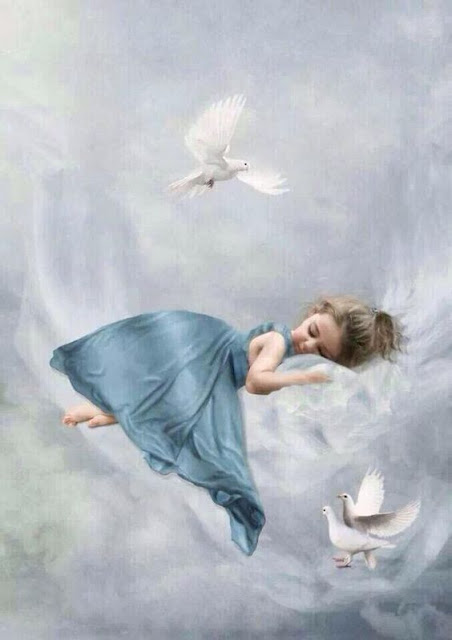 37 Accepting the Atonement for yourself means not to give support to someone's dream of sickness and of death. It means that you share not his wish to separate and let him turn illusions on himself. Nor do you wish that they be turned instead on you. Thus have they no effects. And you are free of dreams of pain because you let him be.
Unless you help him, you will suffer pain with him because that is your wish. And you become a figure in his dream of pain, as he in yours. So do you both become illusions and without identity. You could be anyone or anything, depending on whose evil dream you share. You can be sure of just one thing—that you are evil, for you share in dreams of fear.

38 There is a way of finding certainty right here and now. Refuse to be a part of fearful dreams whatever form they take, for you will lose identity in them. You find yourself by not accepting them as causing you and giving you effects. You stand apart from them but not apart from him who dreams them. Thus you separate the dreamer from the dream and join in one but let the other go. The dream is but illusion in the mind. And with the mind you wouldunite, but never with the dream. It is the dream you fear and not the mind. You see them as the same because you think that you are but a dream. And what is real and what is but illusion in yourself you do not know and cannot tell apart.

39 Like you, your brother thinks he is a dream. Share not in his illusion of himself, for your identity depends on his reality. Think rather of him as a mind in which illusions still persist, but as a mind which brother is to you. He is not brother made by what he dreams, nor is his body, "hero" of the dream, your brother. It is his reality that is your brother, as is yours to him. Your mind and his are joined in brotherhood. His body and his dreams but seem to make a little gap, where yours have joined with his.

40 And yet, between your minds there is no gap. To join his dreams is thus to meet him not because his dreams would separate from you. Therefore, release him, merely by your claim on brotherhood and not on dreams of fear. Let him acknowledge who he is by not supporting his illusions by your faith, for if you do, you will have faith in yours. With faith in yours, he will not be released, and you are kept in bondage to his dream. And dreams of fear will haunt the little gap, inhabited but by illusions which you have supported in each other's minds.

41 Be certain, if you do your part, he will do his, for he will join you where you stand. Call not to him to meet you in the gap between you, or you must believe that it is your reality as well as his. You cannot do his part, but this you do when you become a passive figure in his dream instead of dreamer of your own. Identity in dreams is meaningless because the dreamer and the dream are one. Who shares a dream must be the dream he shares because by sharing is a cause produced.

42 You share confusion and you are confused, for in the gap no stable self exists. What is the same seems different because what is the same appears to be unlike. His dreams are yours because you let them be. But if you took your own away would he be free of them and of his own as well. Your dreams are witnesses to his, and his attest the truth of yours. Yet if you see there is no truth in yours, his dreams will go, and he will understand what made the dream.

43 The Holy Spirit is in both your minds, and He is One because there is no gap that separates His Oneness from Itself. The gap between your bodies matters not, for what is joined in Him is always one. No one is sick if someone else accepts his union with him. His desire to be a sick and separated mind cannot remain without a witness or a cause. And both are gone if someone wills to be united with him. He has dreams that he was separated from his brother who, by sharing not his dream, has left the space between them vacant. And the Father comes to join His Son the Holy Spirit joined.

44 The Holy Spirit's function is to take the broken picture of the Son of God and put the pieces into place again. This holy picture, healed entirely, does He hold out to every separate piece that thinks it is a picture in itself. To each he offers his identity, which the whole picture represents, instead of just a little broken bit which he insisted was himself. And when he sees this picture, he will recognize himself. If you share not your brother's evil dream, this is the picture that the miracle will place within the little gap, left clean of all the seeds of sickness and of sin. And here the Father will receive His Son, because His Son was gracious to himself.

45 I thank you, Father, knowing you will come to close each little gap that lies between the broken pieces of Your holy Son. Your holiness, complete and perfect, lies in every one of them. And they are joined because what is in one is in them all. How holy is the smallest grain of sand when it is recognized as being part of the completed picture of God's Son! The forms the broken pieces seem to take mean nothing. For the whole is in each one. And every aspect of the Son of God is just the same as every other part.

46 Join not your brother's dreams but join with him, and where you join His Son, the Father is. Who seeks for substitutes when he perceives he has lost nothing? Who would want to have the "benefits" of sickness when he has received the simple happiness of health? What God has given cannot be a loss, and what is not of Him has no effects. What then would you perceive within the gap? The seeds of sickness come from the belief that there is joy in separation, and its giving up would be a sacrifice. But miracles are the result when you do not insist on seeing in the gap what is not there. Your willingness to let illusions go is all the Healer of God's Son requires. He will place the miracle of healing where the seeds of sickness were. And there will be no loss, but only gain.


Forgiveness is the only gift I give.

1 Forgiveness is the only gift I give because it is the only gift I want, and everything I give I give myself. This is salvation's simple formula. And I, who would be saved, would make it mine to be the way I live within a world that needs salvation and that will be saved as I accept Atonement for myself.

2 Father, how certain are Your ways, how sure their outcome, and how truly faithful is every step in my salvation set already and accomplished by Your grace. Thanks be to You for Your eternal gifts, and thanks to You for my identity.