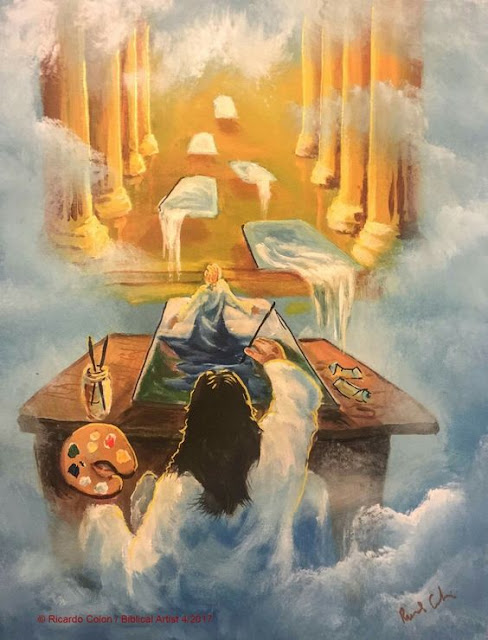 Day 280
The second law of chaos, dear indeed to every worshipper of sin, is that each one MUST sin, and therefore DESERVES attack and death. This principle, closely related to the first, is the demand that errors call for punishment, and NOT correction. For the DESTRUCTION of the one who makes the error places him BEYOND correction, and beyond forgiveness. What he has done is thus interpreted as an irrevocable sentence on himself, which God Himself is powerless to overlook. Sin cannot BE remitted, being the belief the Son of God can make mistakes for which his own destruction becomes inevitable.


Think what this SEEMS to do to the relationship between the Father and the Son. Now it appears that they can NEVER be One again. For One must ALWAYS be condemned, AND BY THE OTHER. Now are they different, and ENEMIES. And THEIR relationship is one of opposition, just as the separate aspects of the Son meet ONLY to conflict, but NOT to join. One becomes weak, the other strong BY HIS DEFEAT. And fear of God, and of each other, now appears as sensible, made real by what the Son of God has done, both to himself AND his Creator.

The arrogance on which the laws of chaos stand could not be more apparent than emerges here. Here is a principle which would define what the CREATOR of reality must be; what He MUST think, and what He must believe; and how He must RESPOND, believing it. It is not seen as even necessary that He be asked about the truth of what has been established for His belief. His Son can TELL Him this, and He has but the choice whether to take his word for it, or be mistaken.

This leads directly to the third preposterous belief that seems to make chaos eternal. For, if God cannot BE mistaken, then He must accept His Son’s belief in what he is, and HATE him for it. See how the fear of God is REINFORCED by this third principle. Now it becomes IMPOSSIBLE to turn to Him for help in misery. For now He has become the “enemy” Who “caused” it, and to Whom appeal is useless. Nor can salvation lie within the Son, whose every aspect seems to be at war with Him, and JUSTIFIED in its attack.

And now is conflict made inevitable, and beyond the help of God. And now salvation MUST remain impossible, because the Savior HAS become the enemy. There can be NO release and NO escape. Atonement thus becomes a myth, and vengeance, NOT forgiveness, is the Will of God. From where all this begins, there IS no sight of help that can succeed. ONLY destruction can BE the outcome. And God Himself SEEMS to be siding with it, to overcome His Son. Think not the ego will enable you to find ESCAPE from what it wants. THAT is the function of this course, which does NOT value what the ego cherishes.

The ego values only what it TAKES. This leads to the fourth law of chaos which, if the others are accepted, MUST be true. This seeming law is the belief you HAVE what you have taken. By this, another’s loss becomes your gain, and thus it fails to recognize that you can never “take away” save from YOURSELF. Yet all the other laws must lead to this. For enemies do NOT give willingly to one another, nor would they seek to SHARE the things they value. And what your ENEMIES would keep from you must BE worth having, just BECAUSE they keep it hidden from your sight.

All of the mechanisms of madness are seen emerging here. The “enemy,” made strong by keeping hidden the valuable inheritance which should be yours; your JUSTIFIED possession, and attack for what has been withheld; and the inevitable loss the enemy MUST suffer, to save YOURSELF. Thus do the guilty ones protest their innocence. Were they not forced into this foul attack by the unscrupulous behavior of the enemy, they would respond with only kindness. But, in a savage world, the kind cannot survive. So they MUST take, or else be taken FROM.

And now there is a vague, unanswered question, not yet “explained.” What IS this precious thing, this priceless pearl, this hidden secret treasure, to be wrested in righteous wrath from this most treacherous and cunning enemy? It must be what you want, and never found. And now you “understand” the reason WHY you found it not. For it was TAKEN from you by the enemy, and hidden where you would not think to look. He hid it in his BODY, making it the cover for his guilt; the hiding place for what belongs to YOU.

Now must his body be destroyed and sacrificed, that you may have that which BELONGS to you. His treachery DEMANDS his death, that YOU may live. And you attack only in self-defense. But what is it you want, that NEEDS his death? Can you be sure your murderous attack IS justified, unless you know what it is FOR? And here a final principle of chaos comes to the “rescue.” It holds there is a SUBSTITUTE for love. This is the “magic” that will cure all of your pain; the missing factor in your madness THAT MAKES IT SANE. THIS is the reason why you must attack. HERE is what makes your vengeance justified.

Behold, unveiled, the ego’s secret gift, torn from your brother’s body; hidden there in malice and in hatred for the one to whom the gift belongs. HE would deprive you of the secret ingredient which would give meaning to your life. The substitute for love, born of your enmity to one another, MUST be salvation. IT has no substitute, and there IS only one. And ALL relationships have but the purpose of seizing it, and making it your own. Never is your possession made complete. And never will your brother cease his own attack on YOU, for what you stole. Nor will God end His vengeance upon both, for, in His madness, HE must have this substitute for love, and kill you both.

Forgiveness-to-destroy has many forms, being a weapon of the world of form. Not all of them are obvious, and some are carefully concealed beneath what seems like charity. Yet all the forms that it may take have but one goal; their purpose is to separate and make what God created equal, different. The difference is clear in several forms where the designed comparison cannot be missed, nor is it meant to be.

In this group, first, there are the forms in which a "better" person deigns to stoop to save a baser one from what he is. Forgiveness here rests solely on the base of gracious lordliness so far from love that arrogance could never be dislodged. Who can forgive and yet despise? And who can tell another he is steeped in sin, and yet perceive him as the Son of God? Who makes a slave to teach what freedom is? There is no union here, but only grief. This is not mercy. This is death.

“Today let me give honor to Your Son, for thus alone I find the way to You. Father, I lay no limits on the Son You love, and You created limitless. The honor that I give to him is Yours, and what is Yours belongs to me as well.”