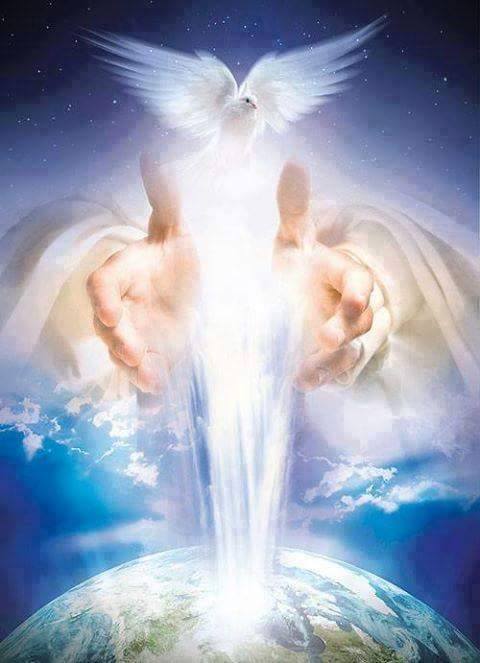 Day 350
When brothers join in purpose in the world of fear, they stand ALREADY at the edge of the real world. Perhaps they still look back, and think they see an idol that they want. Yet has their path been surely set AWAY from idols toward reality, for when they joined their hands, it was Christ’s hand they took. And they WILL look on Him Whose hand they hold. The face of Christ is looked upon BEFORE the Father is remembered. For He MUST be unremembered ‘til His Son has reached BEYOND forgiveness to the Love of God.
Yet is the love of Christ accepted first. And THEN will come the knowledge They are One. How light and easy is the step across the narrow boundaries of the world of fear, when you have RECOGNIZED Whose hand you hold!

Within your hand is everything you need to walk with perfect confidence away from fear forever. And to go straight on, and quickly reach the gate of Heaven itself. For He Whose hand you hold was waiting but for you to join Him. Now that you have come, would HE delay in showing you the way that He must walk with you? His blessing lies on you as surely as His Father’s Love rests upon Him. His gratitude to you is past your understanding, for you have enabled Him to rise from chains, and go with you TOGETHER to His Father’s house. An ancient hate is passing from the world, and with it goes ALL hatred and ALL fear. Look back no longer, for what lies ahead is all you EVER wanted in your hearts.

Give up the world! But NOT to sacrifice. You never WANTED it. What happiness have you sought here that did not bring you pain? What moment of content has not been bought at fearful price in coins of suffering? Joy HAS no cost. It is your sacred right. And what you pay for is NOT happiness. Be speeded on your way by honesty, and let not your experiences here deceive in retrospect. They were NOT free from bitter cost and joyless consequence. Do not look back except in honesty. And when an idol tempts you, think of this; there never was a time an idol brought you ANYTHING except the “gift” of guilt. Not one was bought EXCEPT at cost of pain. Nor was it ever paid by you alone.

Be merciful unto your brother, then. And do not choose an idol thoughtlessly, remembering that he will pay the cost as well as you. For HE will be delayed when you look back, and YOU will not perceive Whose hand you hold. Look forward, then, and walk in confidence, with happy hearts that beat in hope and do not pound in fear. The Will of God forever lies in those whose hands are joined. UNTIL they joined, they thought He was their enemy. But when they joined and SHARED a purpose, they were free to learn their will is one. And thus the Will of God MUST reach to their awareness. Nor can they forget for long that It is but their own.

The Justification for Forgiveness

Anger is NEVER justified. Attack has NO foundation. It is here escape from fear begins, and will be made complete. Here is the real world given in exchange for dreams of terror. For it is on this forgiveness rests, AND IS BUT NATURAL. You are NOT asked to offer pardon where attack is due, and WOULD be justified. For this would mean that you forgive a sin by overlooking what is REALLY there. THIS IS NOT PARDON. For it would assume that, by responding in a way which is NOT justified, your PARDON will become the answer to attack which HAS been made. And thus is pardon inappropriate, by being granted where it is NOT due.

Pardon is ALWAYS justified, and has a sure foundation. You do NOT forgive the unforgivable, nor overlook a REAL attack that calls for punishment. Salvation does not lie in being asked to make unnatural responses, which are inappropriate to what is real. Instead, it merely asks that you respond appropriately to what is NOT real, by not perceiving what has not occurred. If pardon WERE unjustified, you WOULD be asked to sacrifice your rights when you return forgiveness for attack. But you are merely asked to see forgiveness as the NATURAL reaction to distress which rests on error, and thus calls for help. Forgiveness is the ONLY sane response. It KEEPS your rights from being lost to you.

This understanding is the ONLY change that lets the real world rise to take the place of dreams of terror. Fear cannot ARISE unless attack is justified. And if it HAD a real foundation, pardon could have none. The real world is achieved when you perceive the basis of FORGIVENESS is quite real and fully justified. While you regard it as a gift unwarranted, it MUST uphold the guilt you would “forgive.” Unjustified forgiveness IS attack. And this is all the world can ever give. It pardons “sinners” sometimes, but remains AWARE that they have sinned. And so they do not MERIT the forgiveness that it gives.

This is the false forgiveness which the world employs to KEEP the sense of sin alive. And recognizing God is just, it seems impossible His pardon COULD be real. Thus is the fear of God the sure result of seeing pardon as unmerited. No-one who sees himself as guilty CAN avoid the fear of God. But he is SAVED from this dilemma if HE can forgive. The mind MUST think of its Creator as it looks upon itself. If you can see your brother MERITS pardon, you have learned forgiveness is YOUR right, as much as his. Nor will you think that God intends for you a fearful judgment which your brother does not merit. For it is the truth that you CAN merit neither more nor less than he.

Be sure to slip through this temptation with my help, which will not leave you if you ask for it. There is no point in dwelling on the past because it is no longer true now, no matter what it may have been. In one sense all the discontinuous fragments that occur to you are true, but only in the sense that you have dreamed these dreams and seen the others who took part in them. This is not reality as it should be remembered. There is a section in the text on “Present Memory.” Much of the answer lies in that.

Who were these people once? As if it mattered now what dreams they had. Do not encourage nightmares, nor forget there are no happy dreams excepting one. Do not, then, bother with the rest at all. The fragments will continue, but they should be used only to recall your function in its present form and present usefulness. Questions are idle, and a waste of time when time is needed most. Do not delay by looking back, and leave the future in the hands of God. He has much more for you than you can find in dreams.

Urtext – Workbook for Students
350. “Miracles mirror God’s eternal Love.
To offer them is to remember Him,
And through His memory to save the world.”

“What we forgive becomes a part of us, as we perceive ourselves. The Son of God incorporates all things within himself as You created him. Your memory depends on his forgiveness. What he is, is unaffected by his thoughts. But what he looks upon is their direct result. Therefore, my Father, I would turn to You. Only Your memory will set me free. And only my forgiveness teaches me to let Your memory return to me, and give it to the world in thankfulness.”

And as we gather miracles from Him, we will indeed be grateful. For as we remember Him, His Son will be restored to us in the Reality of Love.

Email ThisBlogThis!Share to TwitterShare to FacebookShare to Pinterest
Labels: A Course in Miracles, Daily Devotional, Urtext, Workbook for Students