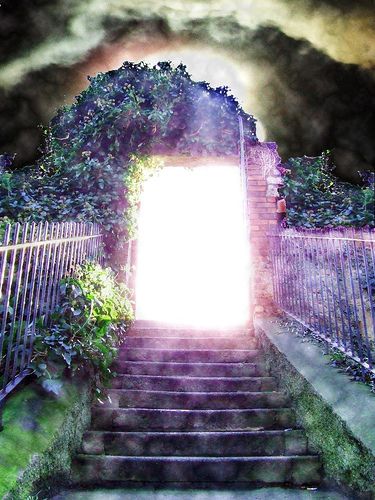 Day 301
Your special function is the special form in which the fact that God is NOT insane appears most sensible and meaningful to you. The CONTENT is the same. The FORM is suited to your special needs, and to the special time and place in which you think you find yourself, and where you can be free of place and time, and ALL that you believe must limit you. The Son of God can NOT be bound by time or place, or anything God did NOT will. Yet, if His Will is seen as madness, then the FORM of sanity which makes it most acceptable to those who ARE insane requires special choice. Nor CAN this choice be made BY the insane, whose problem IS their choices are NOT free, and made with reason in the light of sense.

It WOULD be madness to entrust salvation to the insane. BECAUSE He is not mad, has God appointed One as sane as He to raise a saner world to meet the sight of everyone who chose insanity as his salvation. To this One is given the choice of form most suitable to him; one which will NOT attack the world he sees, but enter into it in quietness, and SHOW him it is mad. This One but points to an ALTERNATIVE, ANOTHER way of looking at what he has seen before, and recognizes as the world in which he lives, and THOUGHT he understood before. Now MUST he question this, because the form of the alternative is one which he can NOT deny, nor overlook, nor fail completely to perceive and see at all.

To each his special function is designed to be perceived as possible, and more and more desired, as it PROVES to him that it is an alternative he WANTS. From this position does his sinfulness, and ALL the sin he sees within the world, offer him less and less. Until he comes to understand it COST him sanity, and stands BETWEEN him and whatever hope he has of BEING sane. Nor is he left without ESCAPE from madness, for he has a special part in EVERYONE’S escape. He can no more be left outside, WITHOUT a special function in the hope of peace, than could the Father overlook His Son, and pass him by in careless thoughtlessness.

What is dependable EXCEPT His Love? And where does sanity abide EXCEPT in Him? The One Who speaks for Him can show you this, in the alternative He chose especially for you. It is God’s Will that you remember this, and so emerge from deepest mourning into perfect joy. Accept the function that has been assigned to you in God’s Own plan to show His Son that hell and Heaven are different; NOT the same. But that, in Heaven THEY are all the same, WITHOUT the differences that WOULD have made a hell of Heaven, and a heaven of hell, had such insanity been possible.

The whole belief that someone loses but reflects the underlying tenet God must be insane. For in this world it seems that one must gain BECAUSE another loses. If THIS were true, then God is mad indeed. But what IS this belief, except a form of the more basic tenet, “Sin is real, and rules the world?” For every little gain, must someone lose, and pay exact amount in blood and suffering. For otherwise would evil triumph, and destruction be the total cost of any gain at all. You who believe that God is mad, look carefully at this, and understand that it MUST be that EITHER God OR this must be insane, but hardly both.

Salvation is rebirth of the idea no-one CAN lose for ANYONE to gain. And everyone MUST gain, if anyone WOULD BE a gainer. Here is sanity restored. And on this single rock of truth can faith in God’s eternal saneness rest, in perfect confidence and perfect peace. Reason is satisfied, for ALL insane beliefs can be corrected here. And sin MUST be impossible, if THIS is true. This is the rock on which salvation rests; the vantage point from which the Holy Spirit gives meaning and direction to the plan in which your special function has a part. For here your special function is made whole, because it shares the FUNCTION of the whole.

Remember ALL temptation is but this; a mad belief that God’s insanity would make YOU sane, and GIVE you what you want. That either God OR you must LOSE to madness, because your aims can NOT be reconciled. Death demands life, but life is NOT maintained at ANY cost. No-one CAN suffer for the Will of God to be fulfilled. Salvation IS His Will BECAUSE you share it. NOT for you alone, but for the Self which IS the Son of God. He CANNOT lose, for if he could, the loss would be his Father’s, and in Him NO loss is possible. And this is sane BECAUSE it is the truth.

This is not death according to the world, for death is cruel in its frightened eyes and takes the form of punishment for sin. How could it be a blessing, then, and how could it be welcome when it must be feared? What healing has occurred in such a view of what is merely opening the gate to higher prayer and kindly justice done? Death is reward and not a punishment. But such a viewpoint must be fostered by the healing that the world cannot conceive. There is no partial healing. What but shifts illusions has done nothing. What is false cannot be partly true. If you are healed your healing is complete. Forgiveness is the only gift you give and would receive.

Urtext – Workbook for Students
301. “And God Himself shall wipe away all tears.”

“Father, unless I judge I cannot weep. Nor can I suffer pain, or feel I am abandoned and unneeded in the world. This is my home, because I judge it not. And therefore is it only what You will. Let me today behold it uncondemned, through happy eyes forgiveness has released from all distortion. Let me see Your world instead of mine. And all the tears I shed will be forgotten, for their source is gone. Father, I will not judge Your world today.”

God’s world is happy. Those who look on it can only add their joy to it, and bless it as a cause of further joy in them. We wept because we did not understand. But we have learned the world we saw was false, and we will look upon God’s world today.