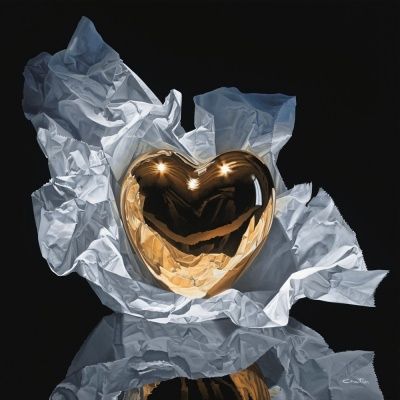 20 Condemn your savior not because he thinks he is a body. For beyond his dreams is his reality. But he must learn he is a savior first, before he can remember what he is. And he must save who would be saved. On saving you depends his happiness. For who is savior but the one who gives salvation? Thus he learns it must be his to give. Unless he gives, he will not know he has, for giving is the proof of having. Only those who think that God is lessened by their strength could fail to understand this must be so. For who could give unless he has, and who could lose by giving what must be increased thereby?

21 Think you the Father lost Himself when He created you? Was He made weak because He shared His love? Was He made incomplete by your perfection? Or are you the proof that He is perfect and complete? Deny Him not His witness in the dream His Son prefers to his reality. He must be savior from the dream he made, that he be free of it. He must see someone else as not a body, one with him, without the wall the world has built to keep apart all living things who know not that they live. Within the dream of bodies and of death is yet one theme of truth—no more, perhaps, than just a tiny spark, a space of light created in the dark, where God still shines.

22 You cannot wake yourself. Yet you can let yourself be wakened. You can overlook your brother's dreams. So perfectly can you forgive him his illusions, he becomes your savior from your dreams. And as you see him shining in the space of light where God abides within the darkness, you will see that God Himself is where his body is. Before this light the body disappears, as heavy shadows must give way to light. The darkness cannot choose that it remain. The coming of the light means it is gone. In glory will you see your brother then and understand what reallyfills the gap so long perceived as keeping you apart.

23 There, in its place, God's Witness has set forth the gentle way of kindness to God's Son. Whom you forgive is given power to forgive you your illusions. By your gift of freedom is it given unto you. Make way for love, which you did not create, but which you can extend. On earth this means forgive your brother, that the darkness may be lifted from your mind. When light has come to him through your forgiveness, he will not forget his savior, leaving him unsaved. For it was in your face he saw the light that he would keep beside him as he walks through darkness to the everlasting light.

24 How holy are you, that the Son of God can be your savior in the midst of dreams of desolation and disaster. See how eagerly he comes and steps aside from heavy shadows that have hidden him and shines on you in gratitude and love. He is himself, but not himself alone. And as his Father lost not part of Him in your creation, so the light in him is brighter still because you gave your light to him to save him from the dark. And now the light in you must be as bright as shines in him. This is the spark that shines within the dream—that you can help him waken and be sure his waking eyes will rest on you. And in his glad salvation, you are saved.


25 Do you believe that truth can be but some illusions? They are dreams because they are not true. Their equal lack of truth becomes the basis for the miracle, which means that you have understood that dreams are dreams and that escape depends not on the dream, but only on awaking. Could it be some dreams are kept and others wakened from? The choice is not between which dreams to keep, but only if you want to live in dreams or to awaken from them. Thus it is the miracle does not select some dreams to leave untouched by its beneficence. You cannot dream some dreams and wake from some, for you are either sleeping or awake. And dreaming goes with only one of these.

26 The dreams you think you like would hold you back as much as those in which the fear is seen. For everydream is but a dream of fear, no matter what the form it seems to take. The fear is seen within, without, or both. Or it can be disguised in pleasant form. But never is it absent from the dream, for fear is the material of dreams from which they all are made. Their form can change, but they cannot be made of something else. The miracle were treacherous indeed if it allowed you still to be afraid because you did not recognize the fear. You would not then be willing to awake, for which the miracle prepares the way.

27 In simplest form it can be said attack is a response to function unfulfilled as you perceive the function. It can be in you or someone else, but where it is perceived, it will be there it is attacked. Depression or assault must be the theme of every dream, for they are made of fear. The thin disguise of pleasure and of joy in which they may be wrapped but slightly veils the heavy lump of fear which is their core. And it is this the miracle perceives, and not the wrappings in which it is bound.

28 When you are angry, is it not because someone has failed to fill the function you allotted him? And does not this become the "reason" your attack is justified? The dreams you think you like are those in which the functions you have given have been filled, the needs which you ascribe to you are met. It does not matter if they be fulfilled or merely wanted. It is the idea that they exist from which the fears arise. Dreams are not wanted more or less. They are desired or not. And each one represents some function which you have assigned, some goal which an event, or body, or a thing should represent and should achieve for you. If it succeeds, you think you like the dream. If it should fail, you think the dream is sad. But whether it succeeds or fails is not its core but just the flimsy covering.

29 How happy would your dreams become if you were not the one who gave the "proper" role to every figure which the dream contains. No one can fail but your idea of him, and there is no betrayal but of this. The core of dreams the Holy Spirit gives is never one of fear. The coverings may not appear to change, but what they mean has changed because they cover something else. Perceptions are determined by their purpose in that they seem tobe what they are for. A shadow figure who attacks becomes a brother giving you a chance to help if this becomes the function of the dream. And dreams of sadness thus are turned to joy.

30 What is your brother for? You do not know because your function is obscure to you. Do not ascribe a role to him which you imagine would bring happiness to you. And do not try to hurt him when he fails to take the part which you assigned to him in what you dream your life was meant to be. He asks for help in every dream he has, and you have help to give him if you see the function of the dream as He perceives its function, Who can utilize all dreams as means to serve the function given Him. Because He loves the dreamer not the dream, each dream becomes an offering of love. For at its center is His love for you, which lights whatever form it takes with love.


Let not my world obscure the sight of Christ.

1 I can obscure my holy sight if I intrude my world upon it. Nor can I behold the holy sights Christ looks upon unless it is His vision that I use. Perception is a mirror, not a fact. And what I look on is my state of mind reflected outward. I would bless the world by looking on it through the eyes of Christ. And I will look upon the certain signs that all my sins have been forgiven me.


2 You lead me from the darkness to the light, from sin to holiness. Let me forgive and thus receive salvation for the world. It is Your gift, my Father, given me to offer to Your holy Son that he may find again the memory of You and of Your Son as You created him.