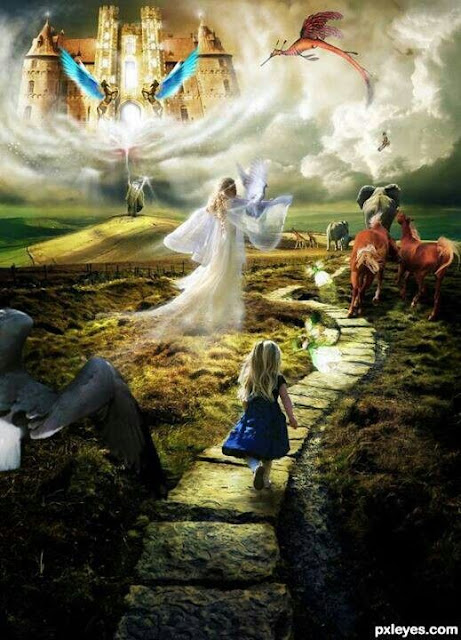 Complexity is not of God. How COULD it be, when all He knows is One? He knows of ONE creation, ONE reality, ONE truth, and but ONE Son. Nothing CONFLICTS with Oneness.

How, then, COULD there be complexity in Him? What IS there to decide? For it is CONFLICT that makes choice complex. The truth is simple; it is one, WITHOUT an opposite. And how could strife enter in its simple Presence, and bring complexity where Oneness is? The truth makes NO decisions, for there is nothing to decide BETWEEN. And ONLY if there were could choosing be a necessary step in the advance toward Oneness. What is everything leaves room for NOTHING ELSE.

Yet is this magnitude beyond the scope of this curriculum. Nor is it necessary we dwell on anything that cannot be immediately grasped. There is a borderland of thought that stands between this world and Heaven. It is not a place, and WHEN you reach it is APART from time. Here is the meeting place where thoughts are brought TOGETHER; where conflicting values MEET, and ALL illusions are laid down beside the truth, where they are judged to be untrue. This borderland is just beyond the gate of Heaven. Here is every thought made pure and wholly simple. Here is sin denied, and everything that IS received instead.

This is the journey’s end. We have referred to it as the “real world.” And yet there is a contradiction here, in that the words imply a LIMITED reality, a PARTIAL truth, a SEGMENT of the universe made true. This is because knowledge makes NO attack upon perception. They are brought together, and only ONE continues past the gate where Oneness is. Salvation IS a borderland, where place and time and choice have meaning still, and yet it can be seen that they are temporary, OUT of place, and EVERY choice has been ALREADY made.

Nothing the Son of God believes can be destroyed. But what is truth to him must be brought to the last comparison that he will ever make; the last evaluation that will be possible, the final judgment upon this world. It is the judgment of the truth upon illusion, of knowledge on perception; IT HAS NO MEANING AND DOES NOT EXIST. This is NOT your decision. It is but a simple statement of a simple fact. But in this world there ARE no simple facts, because what is the same and what is different remain unclear. The one ESSENTIAL thing to make a choice at all is this distinction. And herein lies the difference between the worlds. In this one, choice IS made impossible. In the real world, is choosing simplified.

Salvation stops just short of Heaven, for only perception NEEDS salvation. Heaven was never lost, and so cannot be saved. Yet who can make a choice BETWEEN the wish for Heaven and the wish for hell, unless he recognizes they are NOT the same? This difference is the learning goal this course has set. It will not go beyond this aim. Its ONLY purpose is to teach what is the same and what is different, leaving room to make the only choice that CAN be made. There is no basis FOR choice in this complex and over-complicated world. For no-one understands what is the same, and seems to choose where no choice really is. The real world is the area of choice made real, NOT in the outcome, but in the perception of alternatives FOR choice.

That there IS choice is an illusion. Yet, within this ONE lies the undoing of every illusion, NOT excepting this. Is not this like your special function, where the separation is undone by change of PURPOSE in what once was specialness, and now IS union? ALL illusions are but one. And, in the recognition this is so, lies the ability to give up ALL attempts to choose BETWEEN them, and make them different. How simple is the choice between two things so clearly UNalike. There IS no conflict here. No sacrifice is possible in the relinquishment of an illusion RECOGNIZED as such. Where ALL reality has been withdrawn from what was NEVER true, can it BE hard to give it up, and choose what MUST be true?

Where Sin Has Left

Forgiveness is this world’s equivalent of Heaven’s justice. It translates the world of sin into a simple world, where justice can be reflected from BEYOND the gate behind which total lack of limits lies. Nothing in boundless love could NEED forgiveness. And what is charity WITHIN the world gives way to simple justice past the gate that opens into Heaven. No-one forgives unless he has believed in sin, and STILL believes that he has much to be forgiven. Forgiveness thus becomes the means by which he learns HE has done nothing to forgive. Forgiveness always rests upon the one who offers it, until he sees HIMSELF as needing it no more. And thus is he returned to his REAL function of creating, which his forgiveness offers him again.

How holy are the healed! For in their sight their brothers share their healing and their love. Bringers of peace—the Holy Spirit's voice, through whom He speaks for God, Whose Voice He is—such are God's healers. They but speak for Him and never for themselves. They have no gifts but those they have from God. And these they share because they know that this is what He wills. They are not special. They are holy. They have chosen holiness, and given up all separate dreams of special attributes through which they can bestow unequal gifts on those less fortunate. Their healing has restored their wholeness so they can forgive, and join the song of prayer in which the healed sing of their union and their thanks to God.

Urtext – Workbook for Students
308. “This instant is the only time there is.”

I have conceived of time in such a way that I defeat my aim. If I elect to reach past time to timelessness, I must change my perception of what time is for. Time’s purpose cannot be to keep the past and future one. The only interval in which I can be saved from time is now. For in this instant has forgiveness come to set me free. The birth of Christ is now, without a past or future. He has come to give His present blessing to the world, restoring it to timelessness and love. And love is ever-present, here and now.

“Thanks for this instant, Father. It is now I am redeemed. This instant is the time You have appointed for Your Son’s release, and for salvation of the world in him.”