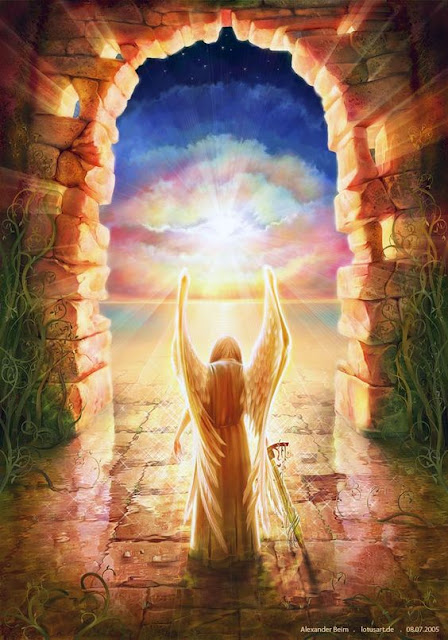 Chapter Thirty One: The Simplicity of Salvation

33 There is a tendency to think the world can offer consolation and escape from problems which its purpose is to keep. Why should this be? Because it is a place where choice among illusions seems to be the only choice. And you are in control of outcomes of your choosing. Thus you think within the narrow band from birth to death a little time is given you to use for you alone, a time when everyone conflicts with you, but you can choose which road will lead you out of conflict and away from difficulties which concern you not. Yet they are your concern. How then can you escape from them by leaving them behind? What must go with you, you will take with you whatever road you choose to walk along.

34Real choice is no illusion. But the world has none to offer. All its roads but lead to disappointment, nothingness, and death. There is no choice in its alternatives. Seek not escape from problems here. The world was made that problems could not be escaped. Be not deceived by all the different names its roads are given. They have but one end. And each is but the means to gain that end, for it is here that all its roads will lead, however differently they seem to start, however differently they seem to go. Their end is certain, for there is no choice among them. All of them will lead to death. On some you travel gaily for a while before the bleakness enters. And on some the thorns are felt at once. The choice is not what will the ending be but when it comes.

35 There is no choice where every end is sure. Perhaps you would prefer to try them all before you really learn they are but one. The roads this world can offer seem to be quite large in number, but the time must come when everyone begins to see how like they are to one another. Men have died on seeing this because they saw no way except the pathways offered by the world. And learning they led nowhere, lost their hope. And yet this was the time they could have learned their greatest lesson. All must reach this point and go beyond it. It is true indeed there is no choice at all within the world. But this is not the lesson in itself. The lesson has a purpose, and in this you come to understand what it is for.

36 Why would you seek to try another road, another person, or another place when you have learned the way the lesson starts but do not yet perceive what it is for? Its purpose is the answer to the search that all must undertake who still believe there is another answer to be found. Learn now, without despair, there is no hope of answer in the world. But do not judge the lesson which is but begun with this. Seek not another signpost in the world which seems to point to still another road. No longer look for hope where there is none. Make fast your learning now, and understand you but waste time unless you go beyond what you have learned to what is yet to learn. For from this lowest point will learning lead to heights of happiness in which you see the purpose of the lesson shining clear, and perfectly within your learning grasp.

37 Who would be willing to be turned away from all the roadways of the world unless he understood their real futility? Is it not needful that he should begin with this, to seek another way instead? For while he sees a choice where there is none, what power of decision can he use? The great release of power must begin with learning where it really has a use. And what decision has power if it be applied in situations without choice?

38 The learning that the world can offer but one choice, no matter what its form may be, is the beginning of acceptance that there is a real alternative instead. To fight against this step is to defeat your purpose here. You did not come to learn to find a road the world does not contain. The search for different pathways in the world is but the search for different forms of truth. And this would keep the truth from being reached.

39 Think not that happiness is ever found by following a road away from it. This makes no sense and cannot be the way. To you who seem to find this course to be too difficult to learn, let me repeat that to achieve a goal you must proceed in its direction, not away from it. And every road that leads the other way will not advance the purpose to be found. If this be difficult to understand, then is this course impossible to learn. But only then. For otherwise, it is a simple teaching in the obvious.

40 There is a choice which you have power to make when you have seen the real alternatives. Until that point is reached, you have no choice, and you can but decide how you would choose the better to deceive yourself again. This course attempts to teach no more than that the power of decision cannot lie in choosing different forms of what is still the same illusion and the same mistake. All choices in the world depend on this—you choose between your brother and yourself, and you will gain as much as he will lose, and what you lose is what is given him. How utterly opposed to truth is this, when the lesson's purpose is to teach that what your brother loses you have lost and what he gains is what is given you.

41 He has not left His Thoughts! But you forgot His Presence and remembered not His Love. No pathway in the world can lead to Him, nor any worldly goal is one with His. What road in all the world will lead within, when every road was made to separate the journey from the purpose it must have unless it be but futile wandering? All roads that lead away from what you are will lead you to confusion and despair. Yet has He never left His Thoughts to die, without their Source forever in themselves. He has not left His Thoughts! He could no more depart from them than they could keep Him out. In unity with Him do they abide, and in their Oneness both are kept complete.

42 There is no road that leads away from Him. A journey from yourself does not exist. How foolish and insane it is to think that there could be a road with such an aim! Where could it go? And how could you be made to travel on it, walking there without your own reality at one with you? Forgive yourself your madness and forget all senseless journeys and all goal-less aims. They have no meaning. You can not escape from what you are. For God is merciful and did not let His Son abandon Him. For what He is, be thankful, for in that is your escape from madness and from death. Nowhere but where He is can you be found. There is no path that does not lead to Him.


I am forever an effect of God.

1 Father, I was created in Your Mind, a holy Thought that never left its home. I am forever Your Effect, and You forever and forever are my Cause. As You created me, I have remained. Where You established me, I still abide, and all Your attributes abide in me because it is Your Will to have a Son so like his Cause that Cause and Its Effect are indistinguishable. Let me know that I am an Effect of God, and so I have the power to create like You. And as it is in Heaven, so on earth. Your plan I follow here, and at the end I know that You will gather Your Effects into the tranquil Heaven of Your Love, where earth will disappear and separate thoughts unite in glory as the Son of God.


2 Let us today behold earth disappear, at first transformed, and then, forgiven, fade entirely into God's holy Will.