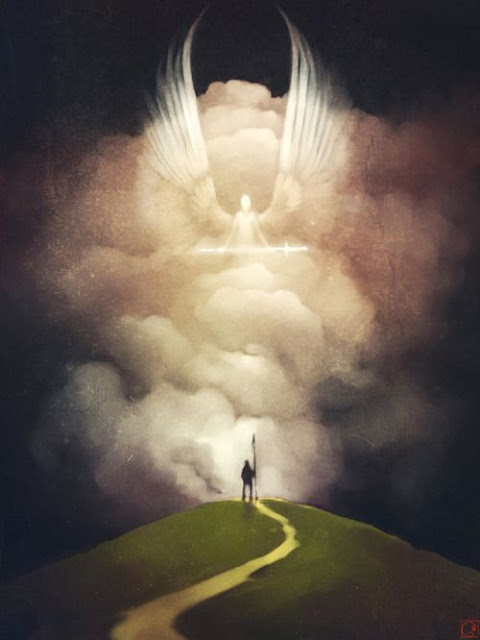 70 Do you not see that all your misery comes from the strange belief that you are powerless? Being helpless is the cost of sin. Helplessness is sin's condition—the one requirement that it demands to be believed. Only the helpless could believe in it. Enormity has no appeal save to the little. And only those who first believe that they arelittle could see attraction there. Treachery to the Son of God is the defense of those who do not identify with him. And you are for him or against him; either you love him or attack him, protect his unity or see him shattered and slain by your attack.

71 No one believes the Son of God is powerless. And those who see themselves as helpless must believe that they are not the Son of God. What can they be except his enemy? And what can they do but envy him his power and by their envy make themselves afraid of it? These are the dark ones, silent and afraid, alone and not communicating, fearful the power of the Son of God will strike them dead and raising up their helplessness against him. They join the army of the powerless, to wage their war of vengeance, bitterness, and spite on him to make him one with them. Because they do not know that they are one with him, they know not whom they hate. They are indeed a sorry army, each one as likely to attack his brother or turn upon himself as to remember they thought they had a common cause.

72 Frantic and loud and strong the dark ones seem to be. Yet they know not their enemy, except they hate him. In hatred they have come together but have not joined each other. For had they done so, hatred would be impossible. The army of the powerless must be disbanded in the presence of strength. Those who are strong are nevertreacherous because they have no need to dream of power and to act out their dream. How would an army act in dreams? Any way at all. It could be seen attacking anyone with anything. Dreams have no reason in them. A flower turns into a poisoned spear, a child becomes a giant, and a mouse roars like a lion. And love is turned to hate as easily. This is no army, but a madhouse. What seems to be a planned attack is bedlam.

73 The army of the powerless is weak indeed. It has no weapons, and it has no enemy. Yes, it can overrun the world and seek an enemy. But it can never find what is not there. Yes, it can dream it found an enemy, but this will shift even as it attacks, so that it runs at once to find another and never comes to rest in victory. And as it runs, it turns against itself, thinking it caught a glimpse of the great enemy which always eludes its murderous attack by turning into something else. How treacherous does this enemy appear, who changes so it is impossible even to recognize him!

74 Yet hate must have a target. There can be no faith in sin without an enemy. Who that believes in sin would dare believe he has no enemy? Could he admit that no one made him powerless? Reason would surely bid him seek no longer what is not there to find. Yet first he must be willing to perceive a world where it is not. It is not necessary that he understand how he can see it. Nor should he try. For if he focuses on what he cannot understand, he will but emphasize his helplessness and let sin tell him that his enemy must be himself. But let him only ask himself these questions, which he must decide to have it done for him:

75 Do I desire a world I rule instead of one which rules me?

76 You have already answered the first three questions but not yet the last. For this one still seems fearful and unlike the others. Yet reason would assure you they are all the same. We said this year would emphasize the sameness of things that are the same. This final question, which is indeed the last you need decide, still seems to hold a threat the rest have lost for you. And this imagined difference attests to your belief that truth may be the enemy you yet may find. Here, then, would seem to be the last remaining hope of finding sin and not accepting power.

77 Forget not that the choice of truth or sin, power or helplessness, is the choice of whether to attack or heal. For healing comes of power and attack of helplessness. Whom you attack you cannot want to heal. And whom you would have healed must be the one you chose to be protected from attack. And what is this decision but the choice whether to see him through the body's eyes or let him be revealed to you through vision? How this decision leads to its effects is not your problem. But what you want to see must be your choice. This is a course in cause and not effect.

78 Consider carefully your answer to the last question you have left unanswered still. And let your reason tell you that it must be answered and is answered in the other three. And then it will be clear to you that, as you look on the effects of sin in any form, all you need do is simply ask yourself,

80 This is your one decision; this the condition for what occurs. It is irrelevant to how it happens but not to why. You have control of this. And if you choose to see a world without an enemy in which you are not helpless, the means to see it will be given you.

81 Why is the final question so important? Reason will tell you why. It is the same as are the other three except in time. The others are decisions which can be made and then unmade and made again. But truth is constant and implies a state where vacillations are impossible. You can desire a world you rule which rules you not, and change your mind. You can desire to exchange your helplessness for power, and lose this same desire as a little glint of sin attracts you. And you can want to see a sinless world and let an "enemy" tempt you to use the body's eyes and change what you desire.

82 In content, all the questions are the same. For each one asks if you are willing to exchange the world of sin for what the Holy Spirit sees, since it is this the world of sin denies. And therefore those who look on sin are seeing the denial of the real world. Yet the last question adds the wish for constancy in your desire to see the real world, so the desire becomes the only one you have. By answering the final question "yes," you add sincerity to the decisions you have already made to all the rest. For only then have you renounced the option to change your mind again. When it is this you do not want, the rest are wholly answered.

83 Why do you think you are unsure the others have been answered? Could it be necessary they be asked so often, if they had? Until the last decision has been made, the answer is both "yes" and "no." For you have answered "yes" without perceiving that "yes" must mean "not no." No one decides against his happiness, but he may do so if he does not see he does it. And if he sees his happiness as ever changing, now this, now that, and now an elusive shadow attached to nothing, he does decide against it.

84 Elusive happiness, or happiness in changing form that shifts with time and place, is an illusion which has no meaning. Happiness must be constant because it is attained by giving up the wish for the inconstant. Joy cannot be perceived except through constant vision. And constant vision can be given only those who wish for constancy. The power of the Son of God's desire remains the proof that he is wrong who sees himself as helpless. Desire what you will, and you will look on it and think it real. No thought but has the power to release or kill. And none can leave the thinker's mind or leave him unaffected.


Fear is not justified in any form.

1 Fear is deception. It attests that you have seen yourself as you could never be and therefore look upon a world which is impossible. Not one thing in this world is true. It does not matter what the form in which it may appear. It witnesses but to your own illusions of yourself. Let us not be deceived today. We are the Son of God. There is no fear in us, for we are each a part of Love Itself.

2 How foolish are our fears! Would You allow Your Son to suffer? Give us faith today to recognize Your Son and set him free. Let us forgive him in Your Name, that we may understand his holiness and feel the love for him that is Your own as well.